Home >  Blog >  "A reminder of the incredible heritage we have been privileged to share, as we serve each other!"

"A reminder of the incredible heritage we have been privileged to share, as we serve each other!"

Posted by Merv McCormack on 7 April 2019 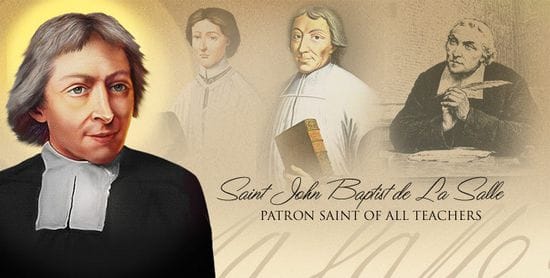 Acknowledging any milestone, be it birthday, anniversary or some other special event, provides an opportunity to reflect on our journey, on our raison d'etre. Occasionally, the reflection may be a sombre one, other times a cause for genuine celebration. As planning for the Tercentenary Year got underway, some wag asked were we really celebrating the Founder's death? Rather than suggest the death of St John Baptist De La Salle was in itself a cause for partying, a wiser interpretation was that his death was a reminder of the incredible heritage we have been privileged to share, as we serve each other, Brothers and partners alike, women and men, girls and boys, with a genuine concern for the poor and social justice.

If all privileges are accompanied by attendant responsibilities, the example of De La Salle's life is profound. It is helpful to recall the enormous challenges he faced, so much so, that "De La Salle once wrote that if he had known what was in store for him, he would not have even begun the task"*. In the challenging environment which is ours today, it is salutary to remember the courage and commitment De La Salle brought to his work. Just as he experienced in his days at Reims or Rouen, Parmenie or Paris, and all parts between and beyond, we are privileged with the task of touching the lives of those we serve and with whom we work.

"Victor Hugo once said, 'The future has many names. For the weak of will it means impossible and for the fearful it means the unknown'. But Pope Francis has a different view. The future, he says, does have a name- and that name is "HOPE".**

As we celebrate the life and death of our remarkable Founder, I hope that we are all fortified by his extraordinary example. I trust that we face the challenges of our work with that spirit of hope, and with the zeal that De La Salle himself demonstrated more than 300 years ago.