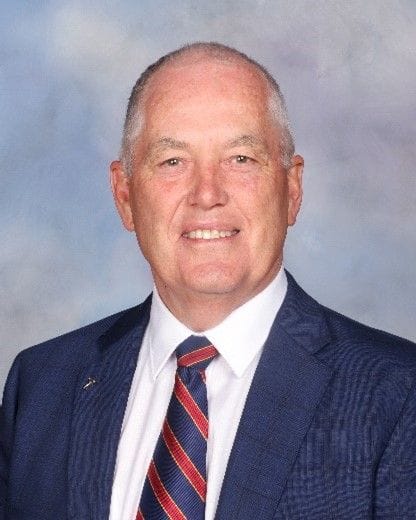 Words to summarize twelve years of leadership and career can be devilishly hard to choose. For Martin Chamberlain, the first lay principal of Francis Douglas College (FDMC), New Plymouth, NZ, these three words encapsulated for him values, relationships and the broad perspective.

Named after a local Columban priest who died a heroic death during the Second World War, the school is a state-integrated Catholic day and boarding college, owned by the De La Salle Brothers, who founded it sixty years ago. With the withdrawal of Brothers in 2009, Martin was appointed Principal. Born, as he says, "a cradle Catholic", he is a true Kiwi, of sheep- farming stock from Orawia, Western Southland. He was educated as a boarding student under the Rosminian and Mercy St. Peter's College, Gore. As for career, Martin "was greatly influenced by many talented teachers during my formative years.  It was natural for me to turn to teaching as a vocation".  One core teaching value he narrates as important for him is "social formation", which he engendered in his previous stints as a principal, and recently, over his 12 leadership years at FDMC. His role has taught him that

"kindness and love are important.  The power you have should be used for empowerment not dominance, and you can be successful only if you are part of a team to which you are kind, loyal and hard-working.  If you are fortunate, they will respond in kind".

Martin's clear values have developed in crafting education for "strong Christian Lasallians" in a school which proclaims Faith, Service and Community. Lasallian pedagogy highlights, the school website says, Faith, Respect, Inclusivity, Quality Education and Awareness of Social Justice Needs. He believes that students can voice these values, and that the 'Lasallian charism' is "logical to the mind and amenable to the heart". From his standpoint, the departure of the Brothers after 50 years produced grieving, "a real sense of loss, a nostalgia that was both real and often idealized". The change was at times prolonged and gruelling: the support of Boards, Brothers and some staff resulted in a transition that was ultimately unifying, and productive of healthy and proud community. Strategic leadership and collaboration aided the process.

In terms of relationships also, from 2009, he has seen the young men of Francis Douglas develop to be "more rounded, more reasonable creatures, who see their teachers as helpful fellow pilgrims in the world of learning.  Our students are kinder, more globally aware and concerned, and more attuned to the feelings of others". He points to their resilience. Part of this character is FDMC's 'Special Character' as a Catholic institution and its Lasallian dimension. On a larger purview, Martin believes that, in the rapidly changing world, schools have maybe lost a love of learning in the rush for qualification credits. Education has moved too far from a strong knowledge base to IT and the skills domain. New Zealand education, a complex world, has experienced "faddish lurches" and the "latest silver bullet". But "young people are wonderful!"

A rejuvenating break with family and celebrations, with possibilities of new opportunities awaits Martin, as he hands over to Mr. Tim Stuck to lead the 790-strong student cohort, of whom 120 board in La Salle House in the city of New Plymouth.