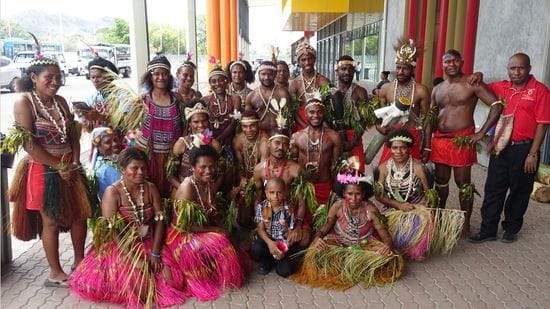 In his homily, Fr John highlighted the Lasallian Vocation and urged everyone to follow and live in the ways of St John de Baptist by helping those that need it most. "Though rich and privileged, he forfeited all of this, as he had a strong ambition of empowering the powerless. He wishes to become like many who are lonely and poor," he said.

Teacher of Jubilee Secondary School, Esther Maragau, said, "It was a memorable Mass.  The singing of the hymns, dancing and processions were excellent".

Lasallian, Emmanuel Bagere, said that it was an honour for him to return for the Closing Mass of the 300th Lasallian Celebrations. "There are many Lasallians working around the country who will later regret not attending this closing Mass," he said.

Wilson Felix, a Grade Eleven student of De La Salle Secondary School, said "I strongly believe in the moral principles set by our patron St John Baptist de La Salle.  I have participated in all the celebrations and my presence here today is to show my respect for our Founder."