38 YEARS OF VOCATION: a pilgrim of Lasallian Christian faith 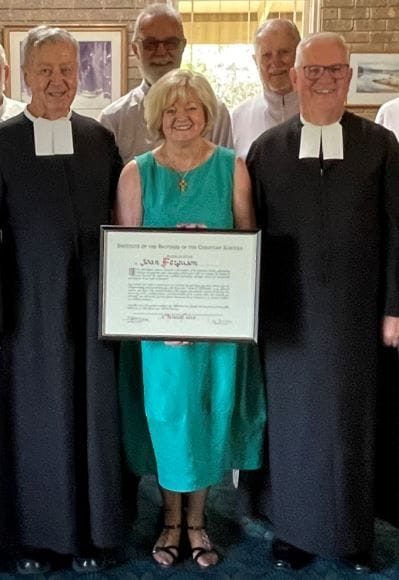 Continuing a journey over thirty-eight years sounds out of this world, exhausting. For Joan Ferguson, fulfilling several roles within De La Salle College Malvern, the path was greatly fulfilling. On Sunday 14 March, it was acknowledged with the conferral of formal affiliation with the Lasallian Institute, in a Mass in the Brothers' chapel at Malvern, due to COVID restrictions. Family and friends witnessed the occasion.

Br Quentin O'Halloran spoke of the significance of "Affiliation", in becoming an honorary member of the De La Salle Family, and Br Gerard Rummery, a guide and friend over the years, read the Citation. Joan herself mentioned several Bothers with affection previous Principals in the person of Brs James Taylor (deceased) and two present for the day William Firman and Timothy Peter. She grew up in a strong Catholic family, being a member of Young Christian Workers in her youth, graduating in theology over several years with the Catholic Theological Union, all the time developing her faith and commitment.

Joan took on the job of private secretary to Br. James Taylor as Principal, and - as she related- worked long hours with a passion and zeal over many years, wrote grant submissions, presented the Lasallian charism at inductions for new staff, interviewed candidates for employment, and drafted many College policies. There was teaching the teachers to use computers for the first time (in Saturday morning classes) and writing easy Word and Excel manuals for them to use. Joan was a member of the Melbourne Archdiocesan RCIA forum, and so was asked to prepare the school's non-Christian students for the Catholic sacraments, in ways that involved the whole boys' families celebrating together. Br. William, Principal at that stage, invited her to take on the role of official College Chaplain, a position she held for 12 years. Her mandate would be "to instruct all students new to the College in the Catholic tradition of the Christian faith, and especially the sacraments, and to respond to students and families in need".

In terms of Lasallian formation, Joan participated in various District programs. She visited the Brothers' mission in Vietnam, offering personal support; while overseas, she went to Reims to connect with the Founder's spirit. She believed, as she said, on the day, that the Institute is "inclusive and forward thinking", and thus still relevant after 340 years, as it believes in "educating the whole person". She could quote the relevance of the Declaration on the Lasallian Educational Mission (2020) and how she had found:

"Fraternity/Community/Association in the daily friendship and wisdom of great (Lasallian) men and women, on whose shoulders I stand today."

"Educational zeal for the poor" spiritual, not solely material has been found by her, she narrates in "grass roots commitment to the poor, regardless of race, religion or creed, during my travels" in the Lasallian global network. Closer to home, her husband Don and several of her five children have offered service / 'tours of duty' to the Lasallian ministry in Papua New Guinea. Steeped, as one Brother says, in the Lasallian tradition, Joan, as a dedicated Catholic Christian, continues to prepare people for Christian initiation as adults in her parish, and serves at 'Tony's Cafe' feeding homeless people three days each week.

Joan Ferguson is the latest of fifteen female affiliates of the Lasallian Institute in the ANZPPNG District.