Posted by Jordan Grantham on 14 September 2018 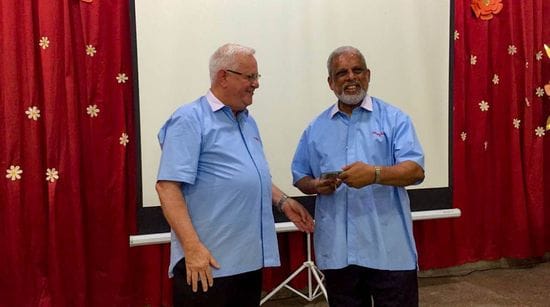 Br Christie's Robe Taking Day was on the Nativity of the Blessed Virgin Mary, 8 September 1968.

"God has gifted him with manifold blessings. He has worked in God's vineyard and given witness to the Gospel through the ministry of education," Br Naqash Sarfraz wrote in a sector circular. Br Naqash also praised Br Christie Dorus' generosity, example and encouragement to others.

Br Christie is from Sri Lanka and arrived in Pakistan in 1985. His experiences in the worldwide Lasallian family include further study in Rome and the United States.

Br Shahzad Gill spoke at the beginning of a celebratory Mass about Br Christie's "50 Golden years of service".

He also mentioned that Br Christie has been a great inspiration for the Brothers, teachers and students in Pakistan.

His Grace Benny Travas, Bishop of Multan and Fr Bashir Francis concelebrated Mass for the occasion. Bishop Travas' homily was described as inspirational.

All brothers and guests gathered in Colin's Hall for a social and festive dinner. MC Br Moon invited Aspirants to perform the first of what would be several traditional dances and songs that evening in honour of Br Christie.

With thanks to Br Naqash Sarfaz and the Multan community of De La Salle Brothers.