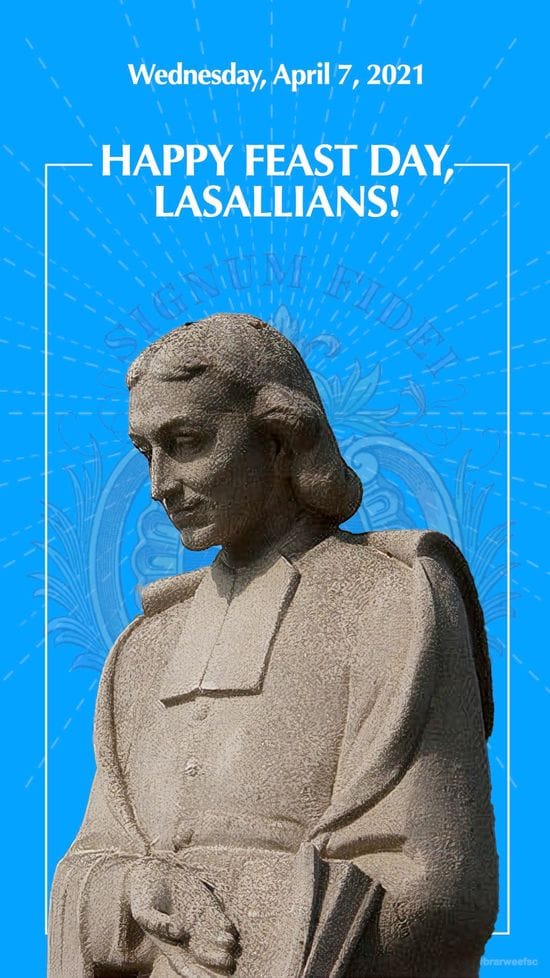 This is the day on the Catholic Church calendar when the life of St. John Baptist de La Salle is celebrated. In the Institute of the Brothers of the Christian Schools, founded by St. John Baptist de La Salle in 1680 in France, the celebration of his life and charism usually occurs on May 15th, the date in 1950 when De La Salle was promulgated as the Special Patron of All Teacher of Youth by the Catholic Church.

Taken from "De La Salle: A City Saint and the Liberation of the Poor Through Education by Br. Alfred Calcutt, FSC

Good Friday, April 7th. "He could not say more because a cold sweat that came over him took away the use of speech. At that moment he entered on a severe agony, which lasted from midnight until half-past two the next day, which was Good Friday. Brother Superior who never left him, then asked him if he did not accept with joy the pain he was suffering. `Yes,' he answered,

"I adore in all things the conduct of God in my regard."

"They were the last words he pronounced. At three o'clock in the morning he fell back into agony which lasted till four o'clock. The agitation it caused him did not prevent there being seen on his face a tranquil and assured look. Finally, towards four o'clock he made an effort as though to go and meet someone, he joined his hands, raised his eyes to heaven, and expired. He died on April 7th 1719, the day of Good Friday, aged sixty-eight years."

"He showed all during his illness only a happy and smiling face, which remained after his death so noticeably that people took pleasure looking at it. You could have thought he was still alive, for he appeared as he was when he made mental prayer, or when he listened to the personal account of some Brother."