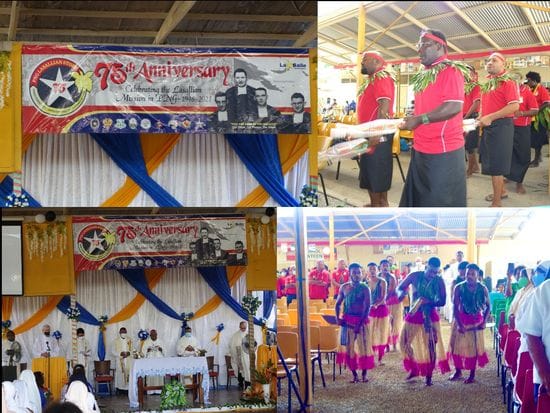 The 75th Anniversary celebration took almost seven months of planning by the 75th Anniversary Organising Committee together with the Principals and School-based Lasallian Facilitators from each of our four Lasallian Schools in Port Moresby. The Thanksgiving Mass was scheduled to be held on 15th May 2021, the actual Feast Day of Our Founder; however, due to the COVID 19 restrictions, it was postponed to the 14th August 2021.

The Mass was to remember and thank the pioneer Brothers (Patrick Howard, Anthony Broderick, Lucian Thorpe and Celsus Maguire) who arrived on the shores of Papua New Guinea in 1946 just after the second World War.

Br. Antony Samy, FSC, Principal of De La Salle Secondary School, Bomana provided opening remarks and welcomed all guests. He introduced Br. Robert Schieler FSC (Superior General),Br Ricardo Angel Laguda FSC (General Councilor-PARC) and Br David Hawke FSC (Br Visitor of the Lasallian District of ANZPPNG). Their prerecorded messages were presented on screen. All three recognised the significant contributions made by the pioneer Brothers, those who succeeded them and the current Brothers and lay partners in the Sector who collaborate to continue the mission.

Each school contributed to a part of the Liturgy. Jubilee led the choir with guidance from Br. Francis ToLiman CFC (NCD Lasallian Family Coordinator). They had meticulously practised for over three months to perfect their singing for the occasion. De La Salle Secondary School, Bomana facilitated the entrance procession, La Salle Technical College the offertory procession and Sacred Teachers’ College, Bomana, organised the recessional procession.

The Bishop of Bereina Diocese – His Grace, Rev. Otto Separy was the main celebrant, concelebrated by the Secretary-General for the Catholic Bishops Conference for PNG & Solomon Islands, Fr. Giorgio Licini, PIME. They were joined by other invited priests from the Archdiocese of Port Moresby. Religious from different congregations were also present especially those who have worked closely with the Brothers. Staff, students and Alumni from various Lasallians schools were also in attendance.

The Bishop gave a fitting Homily about the Feast of the Assumption  and the Blessed Virgin Mary’s call to holiness, humility and obedience. He compared her life of simplicity and sacrifice to the life of the De La Salle Brothers who have sacrificed themselves to come and educate the young people in the country, while also living a life of simplicity with meekness like Our Lady. On behalf of the Church and the Diocese of Bereina, he thanked the Brothers for making significant contribution to education in PNG. He said many of the people the Brothers and their lay partners taught are now in prominent positions contributing to the development of the country. This is a milestone for Lasallians.

Cornell Boniface Aruma from PNGDF and Sir Peter Miria Baki (former Education Secretary) gave wonderful tributes to the Brothers about their experience as students with the Brothers. The old boys were really passionate as they spoke of the Brothers’ contribution and how their lives were forever changed.

The ceremony concluded with lunch catered by Sacred Heart Teachers’ College under the leadership of Mrs Theckla Aknonero. The College prepared more than 700 lunch packs and after distribution only two were left. A great day of thanksgiving for the 75 years of Lasallian Mission in PNG was had by all.

Live Jesus in our Hearts…forever.

Click HERE to watch the video message from the Superior General

Click HERE to watch the video message from Br Visitor