Home >  Blog >  Strengthening peer connections & a chance to reflect upon our relationship with God.

Strengthening peer connections & a chance to reflect upon our relationship with God. 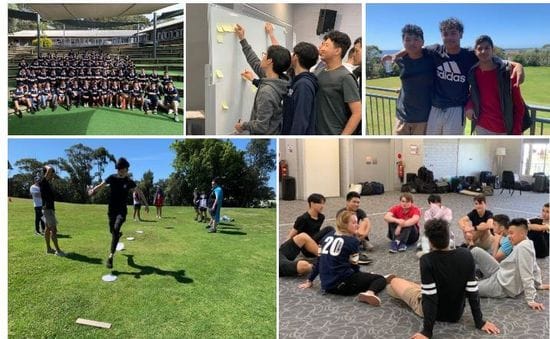 Recently, Year 11 students at De La Salle College Ashfield set off on a three day retreat. The retreat was a way in which students were able to put aside school life and allocate time to strengthening peer connections, provide relief from the recent preliminary exams, and most importantly to reflect upon our relationship with God.

The retreat was held at the Collaroy Centre which was appreciated for its large open areas for leisure as well as its fabulous location right by the beach. On arrival, Aiden Moore, Lasallian Youth Minister, introduced the theme of the retreat which was to 'Aspire, Perspire, and Inspire,' with a reflection where such actions would lead one to achieve their own ambitions, following the example of Michael Jordan.

Icebreakers were a way in which we were able to loosen up some tension and interact with each other. Students were also able to understand that as a year group, they are entitled to their own opinions and that they should be able to express these opinions without having to be judged, as revealed through our controversial discussions. Not only were opinions allowed to be freely expressed, but values were also discussed and challenged in the 'Bomb Shelter Activity', where everyone was able to explore and compare their values and morals within their group. Afterwards, everyone was able to enjoy the cold waters of Collaroy Beach as they were blessed with beautiful sunny weather on both days.

Physical abilities were also put on display in the annual 'Capture The Flag' match between each of the Colour Houses. Their competitive spirit was intense throughout the match as everybody went hard for the win. Some unsung heroes shone through each team as the three win series came down to the wire. In the end, the Maurices house came away with the win, having been initially two points down from each team. This set up what was to be an unbreakable bond between each and every one of us present at the retreat.

Students reflected on their journey over the last year and read some letters written at our Twilight Retreat earlier this year. This emotional journey through the past gave participants as a cohort, a new motivation to achieve all that they can in the near, and distant future.

The highlight of the retreat was the final Mass and the reading of the 'Affirmations' written to one another. It was an emotional experience and one that brought everyone closer together as a year group, to value those around them, and bring them closer to God.

They also received their senior jersey, and Ms Fox spoke to the students about how although everyone is unique in their gifts and talents, that the jersey is a visible symbol of unity as a Year 12 cohort and that we are united through faith and brotherhood.

In conclusion, this Senior Retreat really hit home in all aspects. Through these new relationships and perspectives, participants have been transformed into mature young men going into our HSC year.

Special thanks to Mr John Dunn and Aiden Moore for the spiritual organisation of the retreat and Father Joji for taking time out of his night to celebrate mass. To Brother Pat for his help in the small group discussions and his powerful wisdom, and to Ms Fox for her organisation of the logistics of the retreat. We would also like to thank all of the teachers who gave up their time; Mr Carter, Mr Duncombe, Mrs Saadeh, Ms Hanscombe, Mr Floratos, Mr Kovacic and Mr Di Mauro. Also to Mr Forrester, Mr Corcoran, Mr Mansour and Ms Kelly for visiting us throughout the retreat.