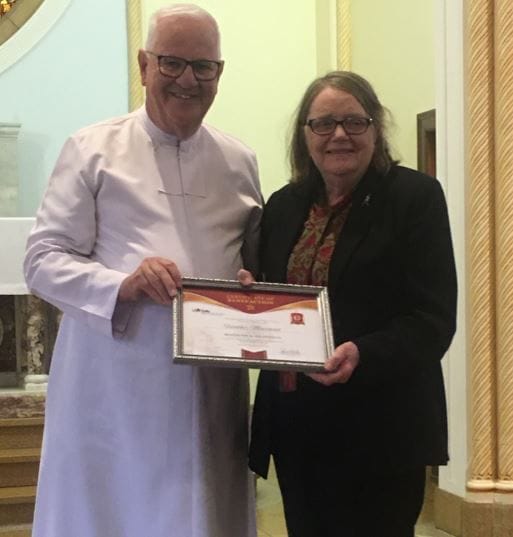 "He went about doing good", the Christian Gospel says about Jesus. Australians traditionally feel uncomfortable with "do-gooders", when linked to religion. Yet, we can be full of praise for fire-fighters, surf life-savers, not to mention the 'Salvoes' and the 'Vinnies'. The De La Salle Brothers show gratitude by recognizing a person as a "Benefactor of the Institute". The ANZPPNG District has given this acknowledgment to 85 individuals since its 1906 founding.

Heather Muirhead was recognised recently in a ceremony.  Heather was given a formal certificate, thanking her for thirty years of service in support of our De La Salle vocation, and our association for the Lasallian Mission. The outline of this service is impressive: Heather has been a loyal friend to Brothers in their community over the decades, with her generosity shown especially at Christmas time and for major celebrations.

In the College, she has taken the lead in organisation of 'St Lucy's Day' a service programme for the visually Impaired. There has been involvement in the 'Show Team' helping students with farming skills and involvement in exhibitions at Regional Shows and the Sydney Royal Easter Show. Invitational Tennis Tournaments, the 1990's Science Club activities and researching and help hosting, as College Archivist, the Class Reunions each year have been all extra commitments taken on.

Over the decades, these Benefactors have supported the local Brothers or the larger Lasallian community mission by their service, often beyond any paid capacity. Many have been teachers, school support or welfare people, Board or committee members, or those from parents, and from friends' groups.  This generosity and openness to the work of "the human and Christian education of youth" is reciprocated by prayer in Brothers' communities for this multitude of associates.

May Heather with other colleagues be inspired to offer service where it is needed for our youth and young adults!