A Champion for Catholic Education 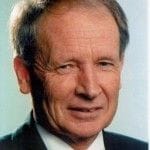 The CEO of the Catholic Education Office in New Zealand, Brother Sir Pat Lynch will leave very big shoes to fill when he retires after 20 years of transforming the face of Catholic schools in the country later this year.

Br Sir Pat was made a Knight Companion of the New Zealand Order of Merit for his 50 years of services to education both in his home country and internationally through the United Nations' body, UNESCO.

"He was a revolutionary educator", Br Pat explains.

"He believed in the training of teachers and teachers visiting childrens' homes and finding out why they weren't at school and when you think of that vision four hundred years ago, he was incredibly ahead of his time."

Br Sir Pat said he drew upon the Founder's example of reshaping the status quo through his campaign over recent decades to ensure that Catholic schools got the financial support they needed from successive New Zealand governments.

"Sectarianism and suspicion of Catholics was present in the bureaucracy and it took a while for us to convince them that the laws that were passed in the mid 1970s were clear and we should be treated as equals", he explained.

"Our schools had always felt like Cinderella schools and we had to overcome that image by convincing a whole group of people that we had evolved", Br Sir Pat said.

"The former Labour Prime Minister Helen Clark asked me ten years ago, why do kids come from the same street and similar homes but go to your Catholic schools and simply achieve at a higher level?"

"I told her, Prime Minister, we believe in a spiritual dimension to education, we have high expectations for our students and we don't back away from excellence in achievement", Br Pat said.

Speaking from his Wellington office, Br Sir Pat has always taken an internationalist view on education and has served on UNESCO education committees for over twenty years, involving frequent meetings in Bangkok and Paris to discuss the direction of global education.

"You realise that nobody has a monopoly on enlightenment", he explained.

"To be able to interact with people from countries such as Mozambique, Brazil and Russia is really a great gift and it's been a great networking forum for people at the forefront of education around the globe".

While retiring from his current role later this year, Br Sir Pat will continue to hold board positions at four De La Salle schools across Australia and New Zealand.

He takes special pride in the progress the three Lasallian schools in New Zealand have made in promoting Maori and Pacific Islander education and is hopeful about the future for Catholic education.

"What I've always believed in strongly is that education is a passport to a successful life and if you don't believe that, then you shouldn't be in education".

"We've been able to open 16 new Catholic schools in New Zealand in the past 15 years and governments are now realising that we're all in this together".