A Champion for Lasallian Education in PNG- Bernadette Ove 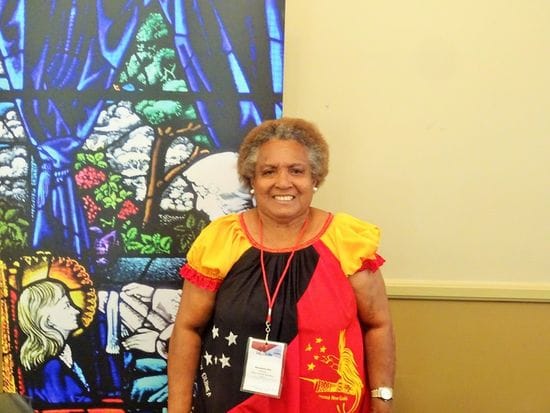 The pioneering Principal of Jubilee Catholic Secondary School in Port Moresby, Bernadette Ove has played a pivotal role in Lasallian education in her  home country, guiding her school into a position where it is regarded as one of the best high schools in PNG.

The journey began 16 years ago when Bernadette was Principal of a state high school in Boroko and she delivered a presentation at an educators conference.

"After my presentation, Brother Dennis Loft who was the Principal of the Hohola Youth Development Centre approached me and asked me if I would like to be the Principal of a new secondary school the De La Salle Brothers were setting up in Boroko", Bernadette explains.

"I was a graduate of Sacred Heart Teachers College where I had first come under the influence of the Lasallian charism and I greatly admired all it stood for, including its commitment to the disadvantaged, so I eagerly took up the opportunity".

From humble origins in 2000, Bernadette now leads a coeducational school with over 600 students with 40 of its final year students last year gaining entry to university courses in PNG.

"When the school first started, high standards were set from the very beginning with the pioneer class and that's continued every year after that", Bernadette says.

The school was named Jubilee Catholic Secondary because it was founded in the year 2000- a jubilee year for the Catholic Church, marking 2000 years of Christianity.

The Year 2000 was also a jubilee year for Lasallians, marking 100 years since St John Baptist De La Salle was canonised and 50 years since he was declared the Patron Saint of Teachers.

Educated by the Franciscans and the Patrician Brothers in PNG, Bernadette had what she describes as an "Adrian Nyal" experience, being led into the Lasallian family through her time as a student at Sacred Heart Teachers College.

Adrian Nyal was a layman who had a chance meeting on the doorstep of John Baptist De La Salle which led him to help the Founder expand his network of schools over 300 years ago in France.

In today's world, Bernadette sees great potential to expand the Lasallian mission and foster closer ties between Lasallian schools in our District through Twinning.

Twinning has worked well over the past 20 years in the Lasallian Region of North America (RELAN) where a number of schools in the United States are twinned with fellow Lasallian schools in the Lwanga District in Africa, which includes the countries of Kenya and Ethiopia.

Through formal twinned school arrangements, students and staff have the opportunity to learn more about each others cultures and customs, bringing together Lasallians across two countries in solidarity as brothers and sisters.

Teachers and principals can then return to their schools renewed with fresh insights and perspectives on the Lasallian mission in education.

Bernadette Ove strongly supports moves to encourage twinning within our own District, linking schools in Australia and New Zealand with fellow Lasallian schools in Papua New Guinea and Pakistan.

"Twinning will help students and teachers by forging stronger connections between our schools in PNG and fellow Lasallians in Australia and New Zealand", she explains.

"It ties in closely with that Lasallian commitment to unity and solidarity wherever our schools happen to be".