Home >  Blog >  A request for a Brothers Presence

A request for a Brothers Presence 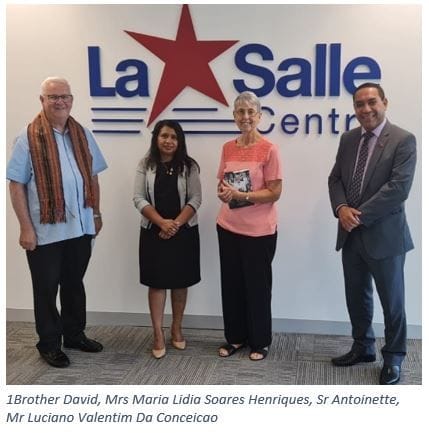 Mr Luciano Valentim Da Conceicao was accompanied by the Consul Mrs Maria Lydia Soares Henrique and Mr Pereira Aquino. Brother David requested that Sr Antoinette Baldwin join the meeting as she has worked in Timor Leste with the Sisters of St Joseph.

It was a courtesy visit as the Consul General established connections with significant people in the Church and State in his jurisdiction.   After introductions and general conversation about the Church in Timor Leste,  the work of the Brothers and mutual acquaintances, Mr Conceicao extended an invitation for the Lasallian Mission to extend to Timor Leste.  He was particularly keen to have the presence of the Brothers in that country.  Regretfully this is not possible at this time.

Br David and Sr Antoinette were gifted with a copy of Raising a Nation, the speeches of Xanana Gusmao.  Mr Da Conceicao also presented Brother David with a Tais, a local scarf which is a mark of welcome and respect.