Not too many schools can boast that they have three strong traditions. Casimir, a co-educational multi-ethnic Catholic community, was named after an early Passionist parish priest who built up Catholic education in inner Sydney. The Good Samaritan Sisters and the De La Salle Brothers are the other arms of the educational mission there. 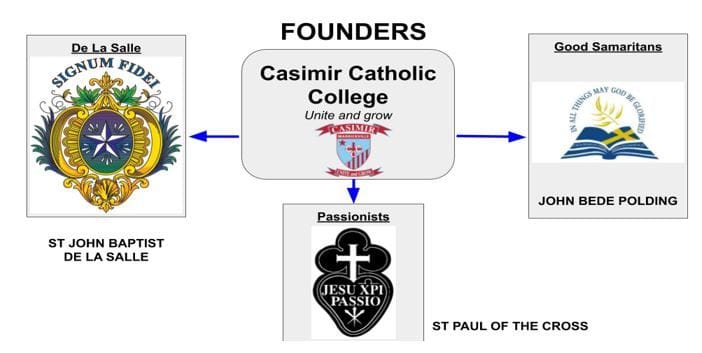 The Principal, Mrs Carmelina Eussen, stresses the wealth of the College’s charisms - “spiritually, socially, academically, culturally, rich with memories and great stories. The stories of our Founders make us rich and allow us to grow as people, and learn from the past”. Character and values from the school’s history “have helped to shape who we are”.

The Sisters of the Good Samaritan, was founded by Archbishop John Bede Polding, in 1857, to care with Christ’s compassion for the destitute and abused women of Sydney. The Australian “Good Sams” became involved with educating girls at St. Brigid’s School in Marrickville in the 1880’s. The Passionist Priests and Brothers were begun by the mystic Italian St. Paul of the Cross, so that by 1741, “Passionists” promoted the ‘living memory’ of Jesus’ sufferings. They conducted the Marrickville parish from 1887.

The De La Salle Brothers came in 1932 to teach the parish boys, and both girls and boys learnt in separate facilities in the schools built by Fr. Casimir by 1932. St. John Baptist de La Salle, the Church’s Patron of all Teachers, was inspired to train religious teachers for French schools from 1680. The Brothers’ Founder focused on children of “artisans and the poor”, developing an exceptional educational pedagogy, which was holistic in practice.

The three ‘charisms’ (Spirit -gifts, which are religious traditions) blended together, so that in 1983 Casimir College was formed as a co-educational Year 7 to 12 school.

Amy Perestrelos, the Lasallian Youth Minister reported that the celebratory ‘Founders’ Day’ Mass was participated in by all, in person, not virtually. “All students were able to receive the Sacrament of Holy Communion or a special blessing, and with great understanding of the difficult times we are living through. (Students kept in mind) … all those who are struggling presently”.

The later community celebrations included talent shows and other activities with peers and teachers. Two typical views were expressed by students:

"This year's Founders Day had one of the best talent shows I have seen in my years in Casimir. Not only did the students have an opportunity to join in on the final performance with Father Eric, but the quality and quantity of the students' performances was amazing to watch." (Katerina Millis)

"Founders Day 2021 was one of the best days this year, especially considering that there was so much uncertainty as to if it would occur. We were lucky enough to experience a day of community and partake in several fun rides, and a strengthening school Mass. These activities enabled us to strengthen our bond as a school and acknowledge the Founders who played a role in establishing Casimir. We were gifted with great memories of an enjoyable day spent with our teachers and peers, which was ended by acknowledging the talent within our school community." (Demi Azzi)