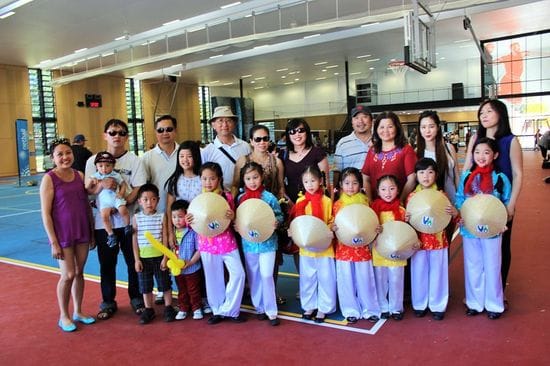 Vietnamese-born Brother Nicet Vo Liem from the Castle Hill community in Sydney (pictured with the hat) has just celebrated a major milestone in his inspiring journey as a Lasallian.

He has recently marked 50 years as a De La Salle Brother which includes 33 years running language schools for Vietnamese children in Sydney.

Three of the Saturday morning language schools are conducted on Lasallian school campuses in Bankstown, Lakemba and Marrickville.

Brother Visitor David Hawke visited these schools last month to pay tribute to the work being done by Br Liem and his team of teachers.

Br Liem's path towards becoming a De La Salle Brother began as an altar boy in a small Vietnamese town where a number of his classmates also entered religious life.

"Nearly everyone in the altar boy group joined the priesthood and now three of my classmates are bishops or archbishops!", Br Liem explains.

"I'm the only one who joined the De La Salle Brothers and I did so after going to a Lasallian school because I was really impressed with the care the Brothers showed towards their students and all the great sports and other activities they organised."

He immediately saw a need for culturally inclusive pastoral care for these migrants and their children.

Br Liem was asked by the Catholic Education Office in the Archdiocese of Sydney to work as a Multicultural Liaison Officer helping migrant communities adjust to their new lives in Australia.

Then in 1982, the NSW Department of Education started community language schools for children from Vietnam.

"We saw that it was important for Vietnamese children to learn the language spoken by their parents and grandparents to help them maintain that connection with their homeland culture", Br Liem explained.

He says the schools have changed dramatically since they started as growing numbers of Vietnamese migrants have settled in Sydney.

"When we started the language schools, all the children we taught were born in Vietnam. But now they are all born in Australia and could be second or third generation migrants", he says.

"English has become their mother tongue, but it's clear that the childrens' parents still put value on the Vietnamese language and want to pass it on to them".