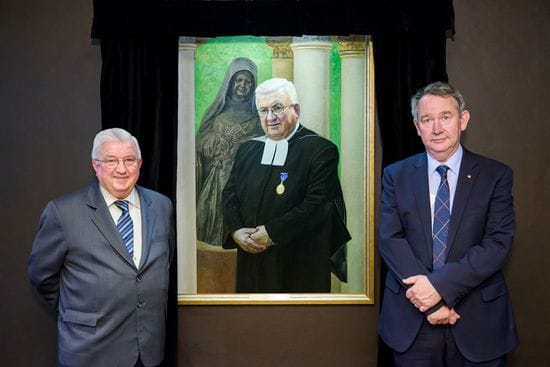 To mark his outstanding contribution to the founding of  the Australian Catholic University in the early 1990s, the institution has unveiled an official portrait of Brother Ambrose Payne, AO fsc at the Peter Cosgrove Centre in North Sydney.

In his occasional address, the Vice Chancellor, Professor Greg Craven, spoke of his own coming to realise that without the extraordinary coordination undertaken by Brother Ambrose, ACU would not have come into being.

'In every real sense,' he said, 'Brother Ambrose was the University's first Vice Chancellor', Professor Craven told the guests at the official unveiling of the portrait.

As founding Principal of the Catholic College of Education in Sydney in the 1970s and 1980s, Br Ambrose identified a critical need for teacher education which was tailored to meet the specific needs of trainee teachers who wished to work in Catholic schools. 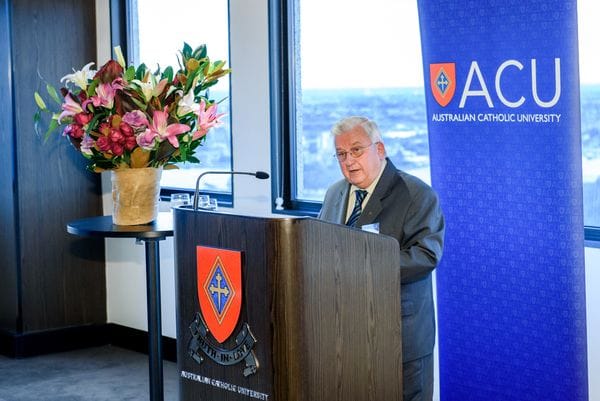 While a number of different religious orders each had their own training colleges at that time, Br Ambrose took responsibility for amalgamating these bodies into Australia's first Catholic university which opened in 1991.

It was no easy feat and it involved bringing together four separate Colleges of Advanced Education on eight different campuses, spread across three different states and the Australian Capital Territory with a total of over 9000 students.

He has since been recognised for his efforts through being made a Member of the Order of Australia for his services to education and though the Australian Catholic University's highest honour, Doctor of the University.

An Old Boy of De La Salle College in Ashfield, Br Ambrose has made a remarkable contribution to the Institute over the past 60 years including as Chair of yourtown for over a decade and as Principal of a number of Lasallian schools. 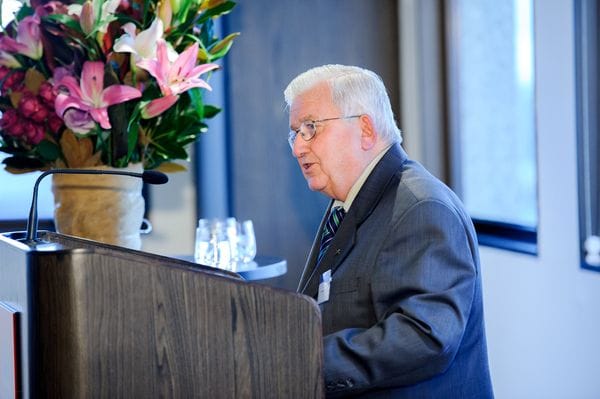 At the unveiling of the new portrait, Br Ambrose paid tribute to the work of the three Vice Chancellors under whose leadership the University had become a remarkable 'community of scholars' known to care for its students.

Several past and present members of the University, as well as many of Brother Ambrose's friends and colleagues attended the unveiling of the portrait, painted by Mr Shen Jiawei.

The portrait depicts Br Ambrose standing in front of a statue of St Mary of the Cross MacKillop, Australia's first saint and the cofounder of the Sisters of St Joseph.

Brother Ambrose's portrait hangs in the company of others for which Shen Jiawei has been commissioned by ACU, including those of  Cardinal George Pell, Cardinal Edward Clancy and Chancellors and Vice Chancellors of the University.