Posted by Jordan Grantham on 26 September 2018 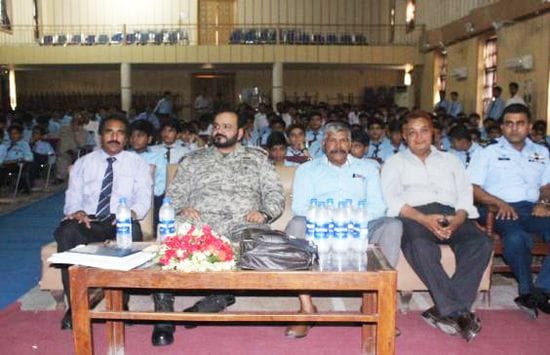 It is always a blessing when former students return to their Alma Mater. Group Captain Muzamil Jibran; a La Salle graduate and presently serving as the Base Commander of the Pakistan Air Force Multan, with his team conducted a Career Counselling Session for the students of La Salle High School on 30 August 2018.

The session began with a presentation of the Pakistan Air Force by Captain Hammad and Captain Mohsin. Ibrahim Khan in his capacity as the Commander described the various selection processes from initial application to the final callup letter for successful candidates.

He also described the various career options in the air force such as officers, airmen and civilian workers and explained the various branches and structure of the air force. Group Captain Muzamil Jibran during his address to the students, thanked God for being a Lasallian and expressed his good wishes well for their studies.

He expressed the purpose of the career counselling session was to develop the interest and motivate the students to join the most premier force of Pakistan. On behalf of the school, Mr Saleem Bhatti presented a souvenir and thanked Group Captain Muzamil Jibran and his team for their presence and time. The session was concluded with the national anthem.