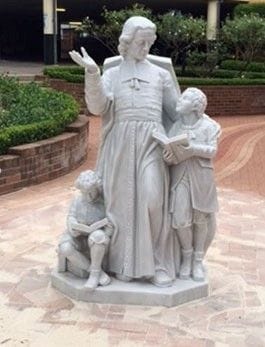 Graduates of De La Salle College Ashfield are playing a major part in this year's celebrations marking the centenary of the all boys school.

From humble origins with just three classrooms in 1916, the college has grown into a thriving secondary school in Sydney's inner-west with 650 students.

To mark the centenary, new statues were recently unveiled in the front courtyard of the school, honouring Mary the Mother of God and St John Baptist De La Salle.

The statues were donated by Old Boys of the college, including Anthony and Robert Ziade who wanted to express their thanks to the school for subsidising their fees due to difficult family circumstances in the late 1950s and the 1960s.

They have shared a personal message with the school community and it is one that resonates with many graduates of the college who have had a similar experience and have gone on to pursue successful careers thanks to the generous Lasallian spirit of the school.

Alumni, parents and students are preparing for a Centenary Mass which will be held on Friday 6 May at 11am at St Mary's Cathedral in Sydney with former college captains invited to be part of the procession.

The oldest surviving Brother Principal of the college, Peter McIntosh has been invited to deliver an address at the Mass.

That evening a Formal Dinner will be held at the Waterview at Bicentennial Park at 6:30pm.

Tickets for the event are $80 per person and more information including RSVP details are included here.

De La Salle Ashfield has a very proud history as a Lasallian school and the college is also planning to honour its former Principals through a panel of photos around the school administration block this year.