Home >  Blog >  An Immersion into Poverty in the Philippines

An Immersion into Poverty in the Philippines 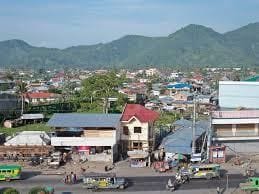 I had heard much about Tacloban and of course I had prepared myself to experience something new in the Philippines during my formation program.

On December 4th, I packed up everything and left for Tacloban city, and reached there the following day. I was vivacious to do something new. I was afraid though, as I was a foreigner and there could be many problems particularly with a new language. I was anxious as I did not know what would I do or what would happen.

Eventually I was ready for the trip. I met my foster mother who helped me to reach her house (it was also going to be my house), which was quite far from the houses of other Brothers. I was stunned when I saw the house where I was going to reside for almost three weeks. There was only one room where two people could sleep and a small piece of land where four children would usually sleep. I found my place on that particular piece of land and shared the bed with the children.

I remember the moment when I just sensed that my feelings were being changed as I was meeting the family members, neighbors and the community of Trinidad (the actual place where I was living). They were so loving and had a great sense of humour. Within a short while I just felt I was accepted and as I was their own family member. My foster father was a fisherman and my foster mother was a teacher, and was teaching in a government school.

I did not know how to swim and I could not go to school every day with my mother, that's why I stayed at home and did the house chores such as helping my foster mother in shopping, washing clothes, washing utensils after cooking, cleaning the house, running their shop and helping my foster father in fishing. I was glad to do all these activities. I also felt fortunate to serve and help my younger siblings in that family. I felt as if I was their elder brother and they would also give me the same respect.

Aside from my family members I would meet the other community members. They all were fishermen. They would always respect me even though I was much younger to them. Despite some obstacles with the language we still had long conversations in the late afternoons when everybody was back from fishing. Sometimes I would tell them the Bible stories too. I would also try my best to guide them just according to my limited knowledge as a Brother and as a teacher.

The issue, which really caught my attention, is that the youth were really at risk. They need guidance; they need someone's assistance to live a better life. Almost every other boy/girl has his/her own story to tell.  I personally wanted to weep with them when I heard their stories. I still remember some boys and girls coming to me and asking for some help to deal with their life problems. I, according to my understanding tried to help them solve some of the problems. I could see the joy on their faces when they would listen to someone advising them and helping them in their life.

I also remember the recollection day which was held by us (the scholastics) based on Advent. I heard that the old and the youth really wept bitterly as they were sharing their experiences and joys of being poor. We were just guiding them and helping them to know the meaning of Advent and Christmas but actually, they were already living it practically but unknowingly.

At that particular point I just felt that I was the true disciple of our father and founder St. John Baptist de LaSalle. I just reminded myself as he (founder) was helping and assisting the youth and people of all ages to the path of eternal life, so I was trying my best to do the same along with the other Brothers.

Aside from all these activities during my immersion, I was not far from my own prayer life and my vowed life. We (the Brothers) would meet every evening and would have our evening prayer. We would also visit the different families and would pray with them. I think it was a good practice to acknowledge the presence of the Brothers in the society. I also started praying at my home with my family. Every evening I would gather my family for the prayers and after the prayers I would tell the saints' stories to my siblings. I would also tell them the stories from the Bible. I taught them prayers before meals as well.

This was my prayer life; I also experienced my vows there and in particular the vows of poverty and stability. I never saw poverty like that before. If I took the breakfast I did not know whether I would be able to take my lunch or not. If I took my lunch I was not sure if I would take my dinner or not. The family was really living or surviving on one full meal or two meals a day. I personally felt being challenged by myself during this immersion. I thank God for showing me the bigger picture of living the vows when I was out of my comfort zone.

I still remember those people who taught me many things. I'm convinced they were a blessing for me. I thank God for all the blessings which He gave me during my immersion and chiefly all those people who loved me so much.

I didn't have food to eat but I cherished the moments of love of many.

I had language problems but I still conversed for hours.

I didn't have a Chapel/Church to pray in, but I felt the presence of God.
I couldn't read the word of God, but I saw people living it.

I really thank God for providing me with this golden opportunity to be with them all and learn from them some new things in life. As of now, I feel that I really needed this kind of experience in life, and of course for the better life.

Live Jesus in our Hearts! Forever.

Author:Br Suneel Sarkar
About: Br Suneel is one of three Scholastics in Pakistan. He recently returned from a visit to the city of Tacloban in the Philippines.
Subscribe via RSS
Tweet