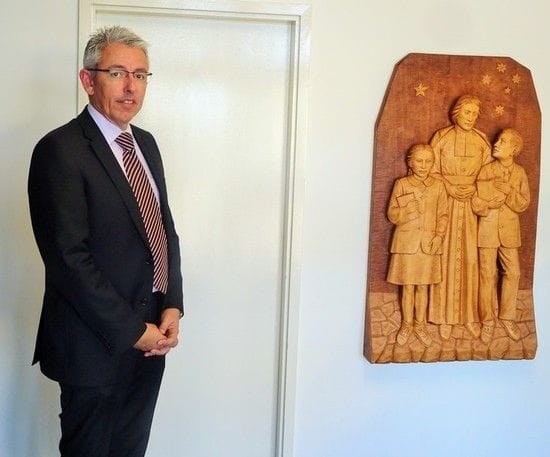 I am pleased to announce the appointment of Mr Craig Mooney as the Principal of Champagnat Catholic College Pagewood, effective from Term 1, 2020.

Craig holds a Diploma of Teaching and a Bachelor of Education (Catholic College of Education Sydney), Masters of Education (University of Western Sydney) and a Graduate Certificate in Religious Education (Australian Catholic University).
The appointment of a new Principal is a very significant occasion for the school community. Parents and families appreciate that Catholic schools are an important part of the Mission of the Catholic Church. Since the early 1820s they have been a priority for the Bishops and Church leaders in Australia. Together with parents, pastors and families the Catholic school provides opportunities for students to be nurtured in their Catholic faith and to know more fully the religious tradition to which they belong. Under the leadership of the Principal, the school community aims to provide high quality Catholic education for all the young people in its care.

At the time of this announcement, I wish to thank Mr Michael Blake for his leadership of Champagnat Catholic College Pagewood (2016-2019).

This is a successful outcome to a thorough and lengthy process of selection. The contribution to the process by Fr John Hayes, Parish Priest and John Robinson, Regional Director (NSW/ACT) of Marist Schools Australia is highly valued.