Posted by https://lasallianresources.org on 7 April 2020 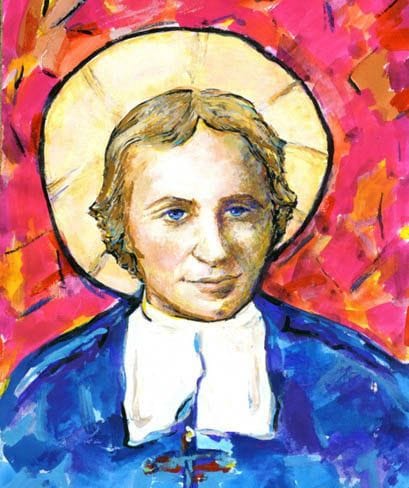 Description of De La Salle's Death - Taken from "De La Salle: A City Saint and the Liberation of the Poor Through Education by Br. Alfred Calcutt, FSC

Ash Wednesday fell on February 22nd this year. "Towards the beginning of Lent, the asthma increased and suffocated him so much that it prevented him breathing. In spite of this discomfort he could not refrain from wanting to keep the Lenten fast with as much exactness as if he had been in perfect health. The Brothers begged him in vain to take some relief. He answered them that the victim was ready to be immolated and that he had to strive to purify it. They believed that Brother Bartholomew, back from a journey he had made to Paris, would have more credit over his attitude. He joined his entreaties to those of the Brothers, but just as vainly. M. de La Salle told him that he knew his needs and begged him not to impose a ruling in this circumstance. They had recourse to his confessor, who acted with authority and forbade him to keep the fast. He was therefore obliged to submit and to accept the relief proposed to him.

His malady got worse. A violent headache arose with a pain in the side that brought him to exhaustion. "He could no longer find any rest nor peaceful position. The doctor was called and had no sooner seen him that he judged his illness was mortal. This holy man received this news with a joyful and tranquil expression, manifesting with Saint Paul the ardent desire he had to leave the earth so as to go and be reunited to Jesus Christ, his divine Master. Nevertheless, all the remedies were tried that were believed the most suitable to soothe his great pain. He took them, in spite of the extreme repugnance and the bad tastes that made him feel sick."

Even at this late stage he had to put up with the inexperienced fervor of a novice and submitted with great docility. "One of them who was helping the Infirmarian, spoke to him on obedience with the language he was being taught in the NovitiateWhen he presented him with something revolting, or it was necessary to move him so as to take another position a movement that his great weakness made very painful `Come, Sir,' said the young man, `you must do this, you must take that through obedience.'" And La Salle "gathered his diminishing strength to lend himself to the Novice's desires."

"Everything that was used for his cure became useless. The malady increased noticeably. So he told the doctor that it was superfluous to go to so much effort, that his hour was approaching and that recourse should be had only to the sovereign Doctor who alone knew what was best for him."  "The cessation of the remedies and his abandonment to God restored him so as to be able to go up to the holy altar again to offer the holy Victimand to confess during almost a fortnight in spite of his pain M. de La Salle was in a state in which any other would have stayed in bed. People were astonished to see him on his feet active and forcing his body to obey him, to satisfy his devotion. But all that is too violent does not lastthe sickness became towards the end of Lent so violent that it obliged the Servant of God to go back to bed. As he felt his body weakening, so joy grew in his soul, and showed on his face. `I hope,' he said, `that I shall soon be delivered from Egypt, to be brought into the true promised Land.'"

He recovers enough strength to celebrate mass on the feast of St Joseph, March 19th.

Maillefer writes: "However, on the day of the feast of saint Joseph, Protector of the Institute of the Brothers of the (Christian) Schools, and for whom he had a special devotion, he wanted to say Mass again in his honor. The evening before he was so weak that it was impossible for him to support himself on his feet or to be able to recite his breviary. The Brothers were persuaded that he would never be able to satisfy his devotion. But towards ten o'clock at night he thought his pain was diminishing and that his strength was returning. He thought it was a dream and he spoke of it to no one. He was agreeably surprised the next day when he effectively felt in a state to get up and to say Mass. He profited with thanksgiving by this last favor. The zeal with which he celebrated the sacred mysteries led all the Brothers to believe that God had given him back his health through the intercession of Saint Joseph. They were all eager to go and show him their joy. But after having given them the satisfaction of speaking to each individually, and having said to each what befitted him according to his needs, he fell back into his earlier weakness, and from that moment on, his life was entirely despaired of."

Blain picks up the story: "The parish priest of Saint Sever, warned of the danger in which the Founder of the Brothers was, came to visit him; and after telling him he sympathised with him in his illness, he exhorted him to patience. The pastor, accustomed to seeing worry and disquiet wherever he went to the houses of sick people at the approach of death, was quite surprised and almost put out to see this man peaceful and in state of indifference to the outcome. As though he had been shocked or little edified with the sense of security in which the Servant of God appeared to be, he felt it his duty to withdraw him from it by announcing bluntly approaching death and the Judgment that follows it. `Know,' he said, ` that you are going to die, and you will then have to appear before God.' `I know,' answered M. de La Salle, `and I am quite submitted to his orders. My lot is in his hands. May his will be done.'" The effect on the parish priest was that "he was even inspired to end with peace and charity a small difference of opinion he had had with the holy man, who had not wished to agree with all he demanded of the Brothers who were on his parish: which gave a real consolation to the pious sick man."

"A few days before the death of the holy man, Brother Superior being alone with him by his bed, noise and a sort of dispute was heard in which the Brother was raising his voice and showing emotion. That appeared surprising; for people knew the profound veneration Brother Bartholomew had for the holy Founder. To find out the reason another Brother entered the sick man's room, and addressing Brother Bartholomew, he begged him to say nothing to M de La Salle that might distress him. `Ah! my Brother', answered the Superior, `if you knew the reason that makes me heated, you would agree with it and you would speak even louder than I. M. de La Salle has just told me that his illness is ruining the house and that it is better to let him die than go to so great an expense.'"