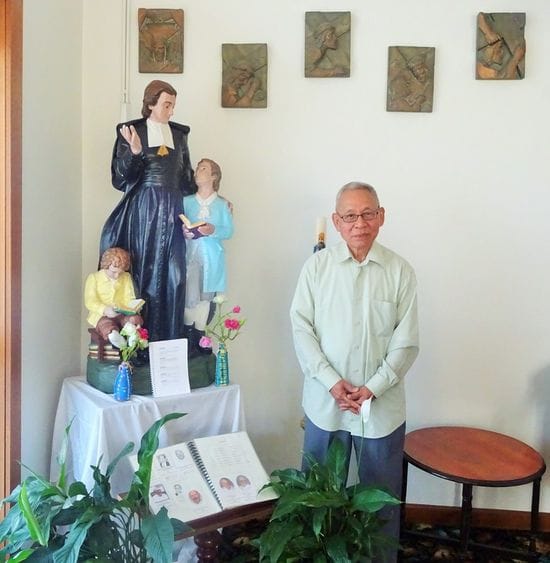 Speaking from the chapel at the De La Salle Brothers' community in the heart of Bankstown, 83 year old Br Eugene Nguyen has never lost the dedication and zeal that led him to become a Brother in the early 1950s.

"I went to a primary school in a small village in Vietnam and we lived four kilometres away from the Lasallian school and so I had to walk to and from school every day", Br Eugene explains with a chuckle.

"There were two Brothers at the school who had a tremendous influence on me and encouraged me to consider a vocation to religious life".

Br Eugene entered the juniorate at a young age with the blessing of his parents and after becoming a Brother at the age of 18, he had to quickly adjust to the challenges of classroom teaching in Vietnam.

"I had to take a Year 7 class with 80 students, which would be unthinkable in Australia today", he said.

Br Eugene went on to teach for the next two decades in Vietnam before the country was thrown into turmoil during the communist takeover in 1975.

"We had around 300 Brothers in the country at that time and those fortunate enough to do so, fled Vietnam because the communists barred them from teaching in schools", he explained.

"But many others were not so fortunate, including my own brother who was also a De La Salle Brother and was killed by the communists".

Br Eugene says it was a painful period for the Lasallian Mission in Vietnam and its legacy lingers on to this day.

"Ten De La Salle Brothers were jailed and some spent 13 years in prison, waiting til the political situation improved", he said.

"The Communists still run Vietnam today and the Brothers can't teach in any schools there".

But Br Eugene says Lasallians in Vietnam have been incredibly resilient with new vocations emerging each year.

He says they make an ongoing contribution through boarding homes for the poor and through plans to open a new secondary school dedicated to teaching students from the disadvantaged Montagnard tribe.

"It was really rewarding being able to help provide a decent education for the people there and helping them prepare for a job to try and escape from poverty", he said.

He is in remarkably good health for an octogenarian and is in his third year, teaching Christian meditation through Wesley Mission in Bankstown.

"I also help recruit new Lasallian volunteers to help in Cameroon because I gain so much satisfaction from seeing how aid work can transform peoples' lives".