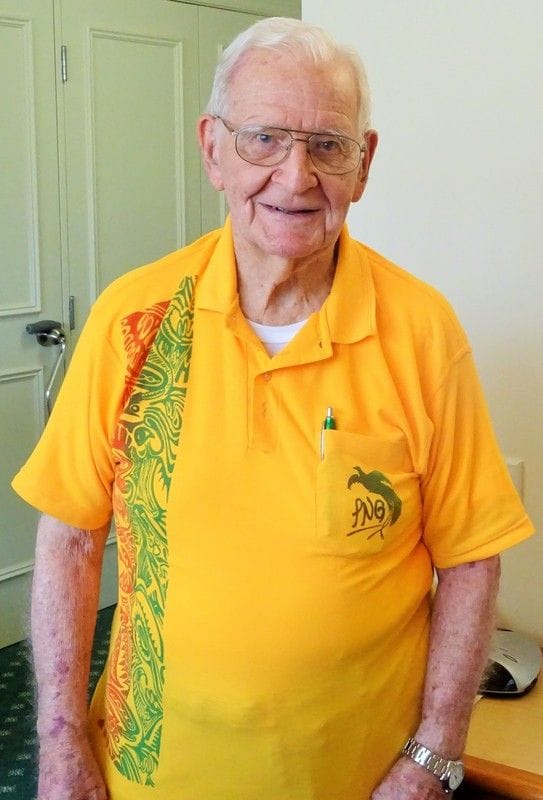 He has spent nearly 75 years as a De La Salle Brother and yet has never lost the youthful zeal and commitment that led him into religious life in the 1940s.

Now aged 90 and a resident at the Villa La Salle retirement home at Southport on Queensland's Gold Coast, Br John Cleary still swims daily in a heated pool and goes on a long walk each day with what he jokingly refers to as his 'four wheel drive'-. his walking frame.

Educated by the De La Salle Brothers in Armidale in northern New South Wales, Br John has incredible experiences to share from his seven decades as a Brother in Papua New Guinea, the Philippines, Australia and New Zealand.

At an anniversary event to mark 70 years of our District's Mission in PNG, Br John reflects back on what led him to become a Brother and more specifically, a missionary.

"I was inspired by the example set by the great Belgian saint, Damien of Molokai who left his home country to minister to lepers on a remote Hawaiian island in the 1860s", Br John explains.

"At one stage a man from England who had just got off a ship confronted St Damien and told him that he would not help lepers if he were paid one thousand dollars for doing so".

"And St Damien told the man- 'Neither would I, but I'd do it for God".

Br John drew upon that message in his work with slum communities and prisons in the Philippines capital Manila in the 1980s and early 1990s.

"It was here that I helped to nurture the faith of the prisoners through a program run by the De La Salle Brothers there called the Inmate Catechists'", he explained.

"It was so rewarding to see the prisoners there build a shrine to Our Lady as a result of that work".

Br John has a strong interest in teacher education which was initially fostered in the 1960s as Principal of Sacred Heart Teachers College in Papua New Guinea.

"I was inspired by the people I met in PNG because they were so hungry for God", Br John explains.

"I quickly realised that the best teachers were those who were born in PNG and who had grown up in the local culture and spoke the local language and I knew the students could relate well to them and ultimately that would enhance their learning as well", he adds.

Br John's passion for the Lasallian mission in PNG led him to return to the country in the 1990s where he worked in the novitiate in Bomana, training new Brothers.

He has seen a radical shift over recent decades with growing numbers of De La Salle Brothers handing over the leadership of schools and other works to Lasallian partners.

But he believes Lasallian partners are working well at keeping the charism.

"You look at the current generation of Lasallian leaders, like yourtown CEO, Tracy Adams, for example, who are so committed as Lasallians that it leaves the older generation of Brothers confident that the partners can continue the work that De La Salle started and he would be the first to support that", Br John added.