Posted by Jordan Grantham on 2 November 2018 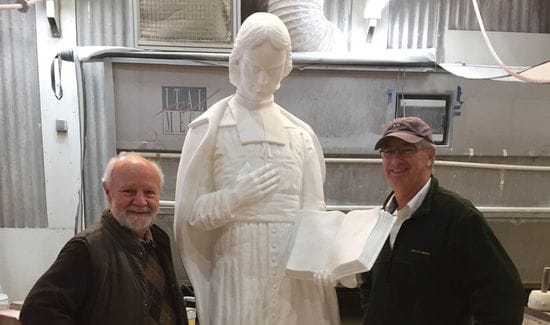 The serene face of the patron saint of teachers now watches over the precinct.

A block of marble from the Greek island of Thasos was shipped over for the significant project, which took four years from start to completion.

Byron Hurst, the school's Creative Arts Coordinator, oversaw the project and designed the initial concept. His own painted artworks are in the local parish church of St Aloysius, Cronulla.

"St John Baptist is holding the rule, which we still use today in spirituality groups," Byron said.

The right hand of the sculpture covers the chest and heart. "It's a gesture of sincerity," he said.

"Hearts are an important element. 'Touching hearts' is a common catchphrase in our Lasallian spirituality.

"It's also a movement in Catholic schools to have a visual expression of faith and charism. It's nice to see the individual charism expressed."

A large bronze Lasallian Star is also prominently displayed in the school as part of the charism.

The surpassing skill and design of the project will make a large impact and leave a long legacy.

"Our view is it's going to be there for a hundred years," Byron said. "Jacek is one of the few blokes left with that level of ability."

Jacek's other prominent works include the Miles Franklin sculpture in Hurstville, many statues at Penrose Park Marian Shrine and restoration work in Sydney's Botanical Gardens.

"Jacek's interpretation brought the personality to it," Byron said.

The National War Memorial, Canberra, University of Sydney Grand Hall and St Mary's Cathedral, Sydney have benefitted from his work.

Jacek completed the De La Salle sculpture, after another artist started on the piece of marble.

"Sometimes my friends laugh at me, 'you are like Michelangelo'," he said wryly.

"I can carve after other people started. Sometimes Michelangelo was given these sorts of stones because it is expensive.

"He also said 'in every stone you have a statue, you only have to cut and the statue appears'."

A local Lasallian alumnus, Col Sammut, donated shrubbery and greenery from his Flower Power business in Taren Point, helping shape the space into a peaceful shrine.