Assumption of the Blessed Virgin Mary 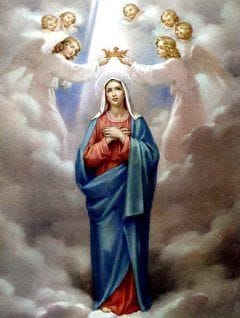 Today the Church celebrates the Feast Day of the Blessed Virgin Mary when, the Holy Mother, "having completed her course of her earthly life, was assumed body and soul into heavenly glory".

Although defined as an article of faith by Pope Pius XII just over half a century ago, the Assumption of Our Lady into heaven has been accepted from back to the earliest of Christian times.

The Assumption signals the end of Mary's earthly life and marks her return to heaven to be reunited with Jesus. While the bodies of both Jesus and Mary are now in heaven, there is a difference between the Assumption and the Resurrection. Where Jesus arose from the tomb and ascended into heaven by his own power, Mary's body was taken up to heaven by the power of her Son.

For this reason we use different words to describe each event. One is the Ascension of Christ and the other, the Assumption of Mary.

Although some scholars insist there is no historical data to prove the historical fact of the Assumption, apart from faith there is also strong and reasoned data to support the event.

In addition there was also the solid and deep-rooted conviction among the first Christians that something extraordinary happened to Our Lady at the moment of her departure from this life. This found expression in writings, sermons, devotional practices, and prayers to Mary "assumed into heaven", and was followed by churches, religious orders, cities and nations across the world dedicating or consecrating to her under the title of Assumption.

The first believed to have asked what had happened to Mary's body was St Epiphanius, a 4th Century bishop who devoted himself to the study of Mary's death and believed Our Lady did not die but instead was recalled to heaven.

The feast day of this holy and momentous event stems from the middle of the 5th Century when the Commemoration of the Mother of God was celebrated each year on 15 August in a shrine located near Jerusalem. More than 100 years later, the feast also commemorated the end of Mary's sojourn on earth and was known as the "Dormition of Our Lady."

The feast was introduced to Rome in the 8th Century by Pope Sergius and from there it spread rapidly throughout western Europe, with Pope Hadrian later giving the Feast Day its official name as the Assumption of Mary towards the end of the Century.

When Pope Pius IX defined the dogma of the Immaculate Conception in 1854, it drew attention to the possibility of a dogmatic definition of the Assumption. Both are truths not found explicitly in the Bible which was when many petitioned the Apostolic See for an immediate definition.

Between 1849 and 1940 more than 2,500 petitions were received from bishops and superiors or religious orders across the world of which more than 73% came from the Catholic hierarchy. Finjally on 1 November in the Holy Year, 1950, the day after the closing of the International Marian Congress in Rome, Pope Pius XII solemnly defined the dogma of the Assumption of the Blessed Virgin Mary into heaven.

This great event took place in St Peter's Piazza in the presence of 40 Cardinals, 500 bishops, thousands of priests and more than a million of the faithful.

"Mary, having completed the course of her earthly life, was assumed body and soul into heavenly glory," Pope Pius told the masses.

For many, the most telling verification of the Assumption can be found not only in learned theological studies or definitive doctrinal statements, but in the medium of Mary's many apparitions which the Church has declared worthy of belief. Where these apparitions have appeared have become beloved Holy shrines visited by millions each year and include the Shrines of Our Lady at Guadaloupe, Lourdes and Fatima.