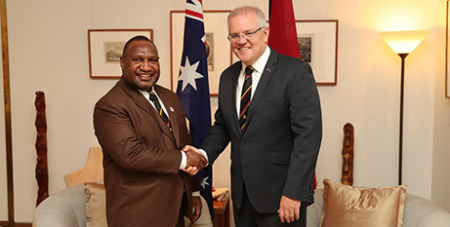 "We need to establish a schedule and timetable towards full closure of the entire asylum process," Mr Marape said in Canberra yesterday. "Both governments will work in bringing this to a conclusion which is mutually beneficial."

Mr Morrison said enormous progress had been made in the talks. "We're just going to continue to work through the issue pragmatically as we have," he said.

Mr Morrison said those people "shouldn't be in Papua New Guinea, Australia, or anywhere else".

However, Mr Marape shied away from the suggestion his country could take up New Zealand's offer to resettle 150 refugees a year, independently of Australia.

The Morrison Government has refused to take up that offer for fear it would be marketed by people smugglers as a backdoor entry.

Malcolm Fyfe msc has written the below well-argued and clearly articulated letter marking the sixth anniversary of then Prime Minister Kevin Rudd's announcement that no person seeking asylum by boat would ever be resettled in Australia. Malcolm suggests various ways forward.

Today is the sixth anniversary of PM Kevin Rudd's announcement that no person seeking asylum by boat would ever be resettled in Australia.

Every single person arriving after that date was to be subjected to indefinite detention on Manus Island, PNG, or in the Republic of Nauru, under 'processing' arrangements between the Australian Government and those Pacific states.

I am writing to every Member of the Australian Parliament from the Diocese of Darwin, on behalf of many, many well-informed and thoughtful Australians who are deeply concerned, indeed appalled, by that component of Australia's current Border Protection Policy.

The offshore processing regime is claimed to be essential as a deterrent to ensure there are no more asylum seeker or refugee arrivals by boat.

Regardless of that claim's validity, this is actually a classic and clear case of legislation that is immoral in the most basic of ways: an evil act is engaged in for the purpose of achieving some good outcome.

How far can one go inflicting suffering on one group of people to prevent unrelated others from acting in a certain way?

Why stop at indefinite detention, which is already just a slightly civilized form of torture? Indeed, in my opinion, it has similarities with the use of "human shields" in warfare.

But back to 2013. The fact that the "stop the boats" slogan featured strongly during the 2013 federal election campaign should not at this point in time prevent changes being made to  Australia's Border Protection Policy to achieve a more humane treatment of people who have committed no crime.

Earlier legislation should not be so set in concrete as to justify a stubbornly   maintained policy of keeping hundreds of fellow human beings locked away in our Offshore Detention Centres, with scant hope of reprieve in sight.

With relentless regularity, Government Ministers have blatantly repudiated and debunked the raft of concerns raised by United Nations personnel, the Human Rights Commission, Church Leaders, Medical and Legal Experts, Children's Welfare Organisations and other highly principled members of the public. Our elected leaders simply take cover behind a Jericho Wall of total secrecy regarding Operation Sovereign Borders, the treatment of persons intercepted at sea and those in immigration detention centres generally.

Tragically, as might have been expected, the incidence of self-harm in detention centres has risen to epidemic levels.

The crippling cost of maintaining the current detention arrangements is also a very real concern, putting huge pressure on the budget. Is this unnecessary outlay to go on and on unchecked?

Here is the first and preferred proposal I would like to make:-

Operation Sovereign Borders involved from the start a two-pronged strategy, characterized by (1) a deterrence policy ("Don't attempt to come here by boat or you will face the unbearable treatment we are meting out to our detainees") and (2) by the diligent efficiency of our Australian Defence Forces monitoring and controlling the seas surrounding us.

Has not our experience over recent years shown that the Australian Defence Forces are quite capable by their own resources, of achieving the goal of "stopping the boats" to the point that we no longer need the deterrent factor associated with our costly and inhumane detention centres on Nauru and Manus Island?

We should henceforth guard our shores by military skill and effective intelligence and discreetly dismantle our offshore detention centres, re-assuming responsibility ourselves for on-shore processing as swiftly as possible.

As regards the detainees still on Nauru and Manus Island, why not consider the feasibility of a carefully planned, once and for all AMNESTY, with cross-party support, for as many of them as possible?

What an innovative and laudatory move that would be!  Our international standing would be greatly enhanced by such an act.

If the above is rejected out of hand and an objective appraisal of it simply vetoed, then I would make the following (fall-back) proposal:

It was back in August 2012 that the Expert Panel on Asylum Seekers delivered its Report. I believe it is time for another "Expert Panel" to be set up on cross-party lines to review the situation and to indicate what changes can now be made to the conclusions and outcomes of the earlier Report.

Australia is capable of something a lot savvier and more generous than our current harsh and mean treatment of asylum seekers and refugees. The majority of people I encounter are most uncomfortable with this ongoing reprehensible phenomenon and there is a growing sense that, as Australians, we are better than this.

As an elected representative with good moral principles, can you stand aloof and make no effort to achieve a more positive and humane future for these already damaged and hapless human beings?

Instead of subjecting them to even harsher Medevac arrangements, let's bring them out of their current confinement into the realm of freedom and opportunity that we Australians inhabit and so put an end to this ugly and unnecessary 6 year episode.

With appreciation for the many good things our elected Members are doing,

"It is in pardoning that we are pardoned." Prayer of St Francis.`