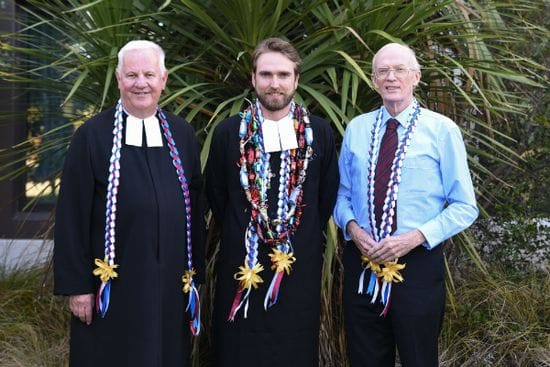 De La Salle Brother Lewis Harwood is soft-spoken. His words are measured and thoughtful, allowing the listener to catch them and reflect on them. He is a teacher.

The youngest De La Salle Brother in the province of Australia, New Zealand, Papua New Guinea and Pakistan, the 30-year-old Australian has been in Auckland for more than a year, teaching mostly young Pacific men about the faith and Catholic traditions.
"I'd like to be in New Zealand for as long as possible but generally, as a brother, you go to a place as long as there is a need," he said.

Br Lewis is one of thousands of young men to answer God's call to service. Pope Francis, in recognising the role of religious in the Church, declared 2015, the "Year of the Consecrated Life".
"I think as a religious brother in the Church, you have an incredible sense of freedom to become who you are and to work for people and enter the lives of people in a deep and intimate way. I'm always around people, so it's really a vocation of relationships," Br Lewis said.
He said putting the focus on consecrated life this year is great.

"There are so many ways to give to the Church, but the consecrated religious is still very important in terms of giving a lifelong commitment in building up the Church," he said.

He noted a concerning trend of fear and terror in society. "This is where religious life can be prominent. We can show a sign of hope amidst the culture of indifference and fear that is creeping into our society. We can offer hope and stability in a chaotic society," he said.
He joined the brothers when he was 24. Before that, he had a relationship with a girl and was a police officer for a year. Still, he wanted to serve God in a deeper way.

"There wasn't a simple moment of calling but it was a series of trying different things and having life experience that made me think more on whatever gifts I have that I can use in a service way to deepen my faith," he said.
The big, big moment, he said, was Pope Benedict's visit to Australia for World Youth Day in 2008.

"That inspired me to take a leap of faith, to say, 'Oh, I'm going to work for the Church and to give my life to the Church in its service to the people'. I have a strong desire to do that as a brother, given my background and education in teaching," he said.
He joined the De La Salle brothers because of their multi-culturalism and strong focus on education.

"Every day you have an opportunity to share the love of the Gospel to young people in your actions, through teaching, listening to young people, hearing their faith and reflections. It's an incredible joy," he said.
He said people point out to him that he will not have his own children.

"I have a thousand children in the ministry. The gift is you share in their lives through the witness you give," he said.