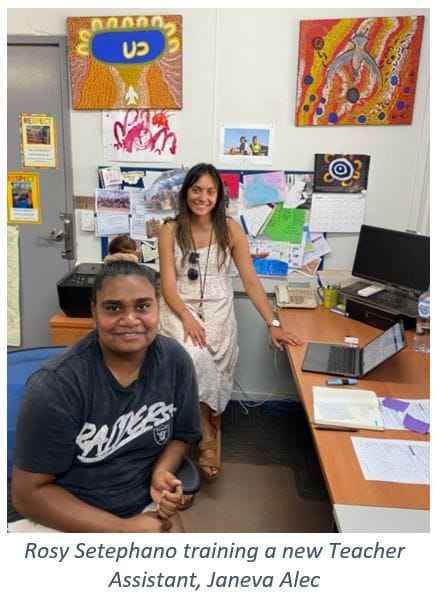 Where can you find values like togetherness and unselfishness today? Rosy Setephano found it over five years as volunteer and staff at Wirrimanu Community Balgo Hills. The small school – Luurnpa Catholic School, where the Lasallian ethos thrives- is integral to the Community and part of her discoveries.

Rosy was a Year 13 student at John Paul College Rotorua, N.Z. in 2014. Her participation in the Lasallian Youth Gathering in Brisbane led to her applying for the role of ‘Share the Mission Volunteer’ (now named ‘Lasallian Volunteer’) for 2015. Of Cook Islander heritage, she joined three other post-student volunteers- from St. Bede’s Mentone, Oakhill College Castle Hill and St. John’s Dandenong.

Balgo showed a closely-knit community of Kukatja people, school teachers and a De La Salle community of three Brothers – Rick, Michael and Martin. The Brothers took over the administration and staffing of the school, as a revived facility for the remote community in 1984. They have welcomed youth volunteers since 2004, at the program inception.

Far from home, she was given “an amazing outlook” on a different world. She acquired her skin name – Napaltjarri. As volunteers, the four young people assisted in the classroom, served the canteen, promoted sports and recreation, and – most importantly, says Rosy, built relationships with the students and local families. The cultural differences were a huge learning, as was the witness of – often - quite young teachers from interstate, who showed an unselfishness which struck home.

In 2016 and 2017, Rosy re-connected with family members, and inspired by stories from Balgo about the ‘Camino’ pilgrimage in Spain, walked the pilgrim route. On returning, she did some youth work at yourtown. Hearing of the advertised position of Administration Manager, she applied to the Principal, Barry Ennis. For the last four years, she has broadened her skill sets in that way.

Immersing oneself in an indigenous culture and discrete community requires “great respect for the culture (and learning)…to navigate community life”.

The importance of “listening, thinking, being respectful (of culture) and being courteous to the land”.

Rosy believes that immersing oneself in an indigenous culture and discrete community requires “great respect for the culture (and learning) …to navigate community life”. She has been impressed by the leadership of the Community’s Board and their planning for the future.

In terms of Lasallian Volunteers (LV’s), she notes that the District has engineered about twenty LV’s since 2015 alone. The Principal Barry Ennis has been a strong supporter of the program, and currently there are three former LV’s on the staff payroll at Luurnpa.

While returning home in late 2021 to Aotearoa New Zealand, Rosy mentions that her drive to five years commitment were “the daily smiles on the students’ faces…The big personalities that walk through the school gates every morning greeting each other is a highlight of her Balgo career”. The close relationships with some of the teachers will allow her to keep in touch in the future.

On the larger cultural level, what it leaves with her is the importance, in this and other intercultural contacts, of “listening, thinking, being respectful (of culture) and being courteous to the land”. 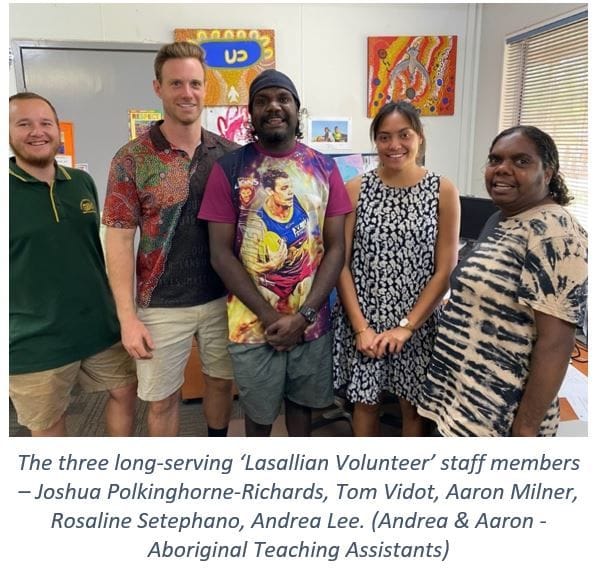