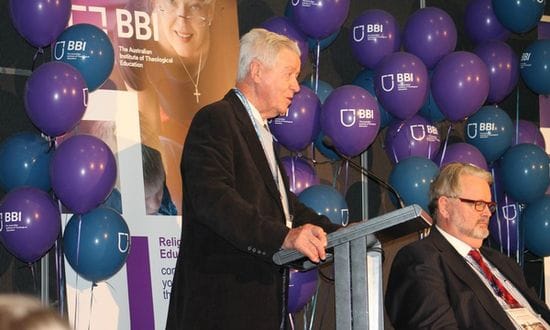 The Symposium of 470 participants, organised by the Broken Bay Institute of Theological Education, was one of the largest gatherings of the many different groups concerned with religious education in Catholic schools in Australia.Brothers David Hawke, John Cantwell, Tony Cummins and Gerard Rummery were participants.

Two outstanding overseas presenters with particular experience of secularisation in France were Professor François Moog from the Catholic Institute of Paris who presented on The impact of secularisation on the Church and on Catholic Schools and Professor Henri-Jérôme Gagey who spoke on Secularisation: A Theological Perspective. Archbishop Mark Coleridge spoke of The Future of Religious Education in Australian Catholic Schools: Opportunities and Challenges. Professor Richard Rymarz chose to comment on Teacher Formation in Religious Education, Dr. Debra Sayce spoke of the challenges of Developing and RE Curriculum in an increasingly Secular Culture and Professor Therese D'Orsa outlined the connections between Religious Education and Mission.

Brother Gerard Rummery had been asked to read and launch a book, Religious Education in Australian Catholic Schools: Exploring the landscape, with 18 different articles compiled by Richard Rymarz and Angelo Belmonte, the first nine on key issues, the second nine on the different kinds of curriculum prepared by the different Australian archdioceses and dioceses. He pointed out some of the key points of these outstanding articles against the background of the recent national Census, commended the importance of the 18 articles, spoke strongly in support of the Leuven Project in

Melbourne and Victorian Catholic schools but questioned how it was in such an overview that there was not a single reference to Islam or ecumenism. There were 12 different workshops offered on diverse key aspects of religious education that provided for close contact and discussion between participants and presenters.

The Symposium concluded with a Panel Discussion by four different speakers with commentary from Richard Rymarz. Brother Gerard Rummery spoke strongly about his faith in Catholic schools, his agreement with Professor Charles Taylor's writings suggesting that secularisation could also have its own strengths but lamented that the abundant bibliographies provided by the articles of the newly-launched book were too exclusively Catholic, without even a single reference to any of the 14-15 distinguished writers on religion itself as a distinct form of thought and awareness.