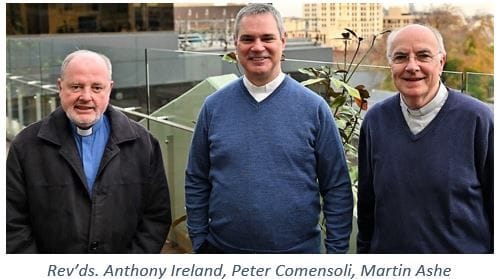 Fr. Tony Ireland, known to some Brothers, and by his parishioners at Doncaster in Melbourne, has been appointed by Pope Francis as one of two auxiliary bishops to share leadership with Archbishop Peter Comensoli in Melbourne.

Monsignor Anthony was educated in the once classic Catholic way, in a parish primary school at Caulfield, which led to De La Salle Malvern for secondary studies. Graduating in 1974, he tested out the world of commerce before essaying the vocation to priesthood at Corpus Christi College in 1981. He was ordained as a presbyter in 1987, and later, showing aptitude, was appointed Dean of Studies at his old seminary in 2006. For the three following years he was the in-charge Rector of the Seminary.

Appointments have flowed over his ministry: a member of the CDF Board and Ministry to Priests; a Director of Catholic Capital Grants (Victoria) Ltd: the Archbishop's appointee to the Archbishop's Melbourne Senate; on the Archbishop's Curia; member of the College of Consultors; Commissioner and Assessor for the Diocesan and Extension and Maintenance Fund; School Chaplain and Canonical Administrator to varying Colleges at Mentone, Frankston and Bulleen; and Chaplain to the Catholic Nurses Guild. He was the Spiritual Adviser to the State Council of St Vincent de Paul for eight years. Over time, he has been the Episcopal Vicar for Health and Aged Care and is also currently the Episcopal Vicar for the Eastern Region of the Archdiocese.

With Fr. Martin Ashe, he will receive episcopal ordination in July.