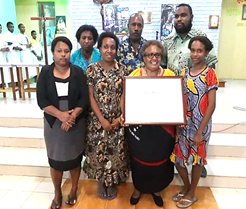 The Papua New Guinean Lasallian Family is losing a shining light, as Bernadette Ove has retired as leader of Jubilee Catholic Secondary School in Hohola in December 2020. Never retiring in her zeal and commitment, she leaves a massive heritage with Lasallians.

Initiated by Br. Denis Loft in 2000, with six teaching positions and a K45,000 grant from the NCD Education Department, the first Years 11 & 12 Catholic school in Port Moresby, was looking for a Principal. Marie Hardwick, volunteered and was seconded from De La Salle Malvern. She became the mid-wife of the new venture, lead teacher and effectively in charge. Three classes of 35 were the initial students from Marianville. Br. Denis, Acting Principal later in 2000, had approached Bernadette, a principal in Goroka. She was one of a very few Level 9 teachers. Marie Hardwick's strong belief in Lasallian practices ensured Mrs. Ove was mentored and partnered in developing a Lasallian ethos.  In the new millennium, increasing emphasis was put by the District on lay Lasallian formation programs: Bernadette was urged by Marie to attend one such program at Narooma NSW in mid-2001.

"She has been an extraordinary influence on the school, and made sure that the school was always seen as a Lasallian enterprise.  She had various sayings of the Founder, St. John Baptist de La Salle painted in strategic places, named the school houses after Lasallian saints and family, and always had staff or students attend whatever programmes were happening in PNG or Australia".

As a highly experienced Principal already, Bernadette became a dynamo in Jubilee Catholic School, leading by example and heavily involved in school activities. The quite outstanding academic results, always in the top tier, established Jubilee's continuing reputation in NCD education.

Her early colleague, Marie Hardwick saw her as the "godmother of the school".  Other teachers and ex-students viewed her as a wisdom figure, encouraging, welcoming and selfless. Aware of those at the margins, she promoted moral values encapsulated in the 'Five Characteristics of a Lasallian School'. Grounded in her judgments, other Lasallians have seen her as compassionate, collaborating and fully supportive of events like teacher formation seminars, the 2016 Inter-Schools Lasallian Cultural Day, and the more recent Women's Symposium in New Zealand.

For many years, particularly when De La Salle Bomana was no longer administered by the Brothers, Bernadette was the one who maintained the Lasallian gatherings, retreats and publicity. Br. Joseph Gabel, then teaching at Hohola Youth Development Centre, remembers her high regard for the Brothers. She was:

"passionate about all things Lasallian, and in particular about the quality of education the students received, and which teachers gave".

In February 2018, her achievements and dedication to Lasallian education in Papua New Guinea was recognised with the Brothers' Institute conferring on Bernadette the honour of Affiliation.

In an interview recently, she maintains that her professional development, as well as her Christian spiritual formation, has been nourished by her involvement in the Lasallian educational mission. Her message to her co-Partners in the Mission, as she retires after 20 years of leadership, is to be "passionate about teaching". And she sees the same passion needing to be engendered in students' learning. For her, serving others in the 'Holy Presence of God' brings life. Lasallian spirituality is "very relevant to Christian educators", and with other denominations common ground can be found in what is, we believe, 'God's work' in God's vineyard. (from an interview for Mambu magazine, November 2020).