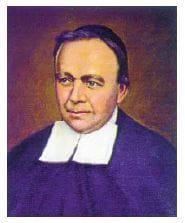 First child of a family of modest condition, he attended the village school until the age of 11, and then started work to help to support his family. Those who knew him noticed his sincere piety, com-bined with a notable ability to entertain and to organise his companions. It was the sign of the mission to which God had called him.

At the age of 24, he entered the Novitiate of the Brothers of the Christian Schools, where he began his religious life with great commitment and seriousness.

Kindness, equanimity, and an unvarying patience marked his 13 years of teaching youngsters at Saint Joseph's College in Rheims.

He was 39 when he was appointed Master of Novices. This was a very sensitive role, not to be entrusted to just anyone, because a Novice Master has to raise up the future Brothers of the Christian Schools. He showed great zeal in training novices, who would go on to provide a Christian education to young people. He remained in this post until his death on October 23rd 1890, at the early age of 52.

After his death in Rheims, he was revered as a holy person. His cause of beatification was introduced in 1938, on the occasion of the centenary of his birth, but his cause made no progress for many years. It was only in 1986 that the Decree was promulgated on the heroism of his virtues. A miracle had already been accepted, so the beatification followed quite quickly. It was Pope John Paul II who beatified him on November 1st 1987.

His feast is celebrated on October 23rd.