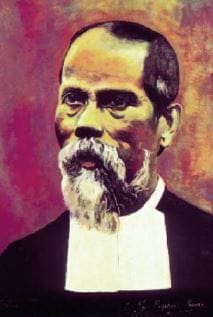 He too belonged to what might have been called the middle-class of the time in Madagascar, in service to the royal family. He certainly had at-tractive prospects ahead of him. But God's plans and the young man's choices pointed in a different direction.

He too was the first student of the Brothers in that country. He too was endowed with a brilliant intelligence and a strong will, both of which helped him challenge his family's ambi-tions for him and become a disciple of those dedicated missionaries ad-mittedly somewhat unusual who had arrived in the Island a little ear-lier. He insistently asked to join them. The Brother who was responsible for accompanying him and forming him acceded to his request only after seven years' apprenticeship. And with a marvellous result!

The future Brother Raphaël-Louis matured quickly and grew cultur-ally, religiously and humanly. He was to show his character as a teacher, a translator of Malagasy works into French works, and a writer of text-books in this work he was tireless. But a time came when, following ri-ots and agitation for independence that rocked the Island, all foreign missionaries were expelled and Brother found himself elected vox populi as leader of the Island's Catholics. This was an unexpected role, and it turned out to be incontrovertible proof of his uncommon abilities: form-ing catechists, organizing meetings, gatherings and paraliturgies in all parts of the Island, composing pamphlets and compendia of Catholic doctrine, as well as writing hymns and poems. His influence was evidenced by the fact that when after three years' absence foreign mission-aries were allowed to return, they found with amazement that the Catholic communities were quite numerous and that the people had as much fervor as when they had left them.

In recognition of his literary output, when the Academy of Madagascar was created in 1902 Brother Raphaël was immediately named as a member, and his portrait is part of the gallery of eminent cit-izens of the great Island.
But he was not spared a humiliating cross. He was accused unjustly by one of his former catechists as having belonged to a secret society to which a number of intellectuals also belonged. As such he was arrested and imprisoned. But his other followers rallied to the rescue and suc-ceeded in having him acquitted, carrying him back to his community in triumph. The stay in the unhygienic prison cell, unfortunately, had an adverse effect on Brother Raphaël's health. To help him recover, he was sent to Fianarantsoa on the coast, but he did not recover, and it was there that he died on May 19th 1919.

The canonical process, started in the diocese of Antananarivo on June 1st 1995, reached the final stage in Rome on December 17, 2007 with the âDecree on the heroic virtuesâ, which gave him the title of Venerable. On January 17, 2009 the Decree on the mira-cle cleared the path for his be-atification, which was cele-brated with great solemnity in Antananarivo on June 7th, 2009, and which was attend-ed by an enormous number of people.

His liturgical feast is cele-brated on May 19th. 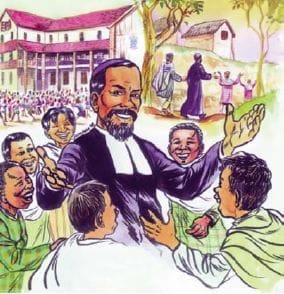