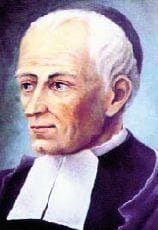 John Bernard, the future Brother Scubilion, was born during the French revo-lution, that is at a time when France was caught up in the sweeping social, political, cultural and religious upheaval that oc-curred in the last decade of the 18th century. The child was baptized on the day he was born, but at the house of his grandparents, because from 1792 onwards, baptisms, con-firmations, and first communions were not entered into parish registers. His father was a stonecutter and his mother a housewife, as was usual at that time. But the wealth of the family lay in its faith in God and in his providence; and so there was always bread on their table.

When the revolutionary storm was over, parishes began to function, and the new parish priest saw the virtue of the boy and helped him to continue the studies that opened for him the doors of religious life. He was 25 years old when he knocked on the door of the novitiate of the Brothers of the Christian School in Paris. During the years of his forma-tion, John Bernard, now Brother Scubilion, understood that sanctity was not something vague : it was sufficient to follow the way indicated by the holy Founder of the Brothers; to read and meditate on his writings and, little by little, to put into practice what they say.

In 1833, after 10 years in France, he expressed the desire to go where the need for the evangelising work of the Church was more urgent. With two companions, he set sail for the island of La Réunion, in the Indian Ocean. After 85 days of sailing and doubling the Cape of Good Hope, the small group of three religious landed on the island, considered to be the "pearl of the Indian Ocean".

For 34 years Reunion Island was the site of his apostolate as a teacher and as a catechist of the local people, and as a defender of the weak and of the slaves. Thanks to him, Christ came to be known, loved and glori-fied, not only by the poor and the marginalized, but also by the slaves who, without bloodshed, and through his tireless action, were able to obtain their emancipation. It was on December 20th 1848 that slavery was abolished on the island. Brother Scubilion is remembered with good rea-son as âthe apostle of the slavesâ.

He died at Sainte Marie, RÃunion, on April 13th 1867. His tomb is continually visited by pilgrims.

The process of his beatification was very long: Opened at La RÃ©union in 1902, it was interrupted for a long period. Finally it was resumed in Rome in 1981 and resulted in his beatification, which was proclaimed in La Rauunion by John Paul II on May 2nd 1989.