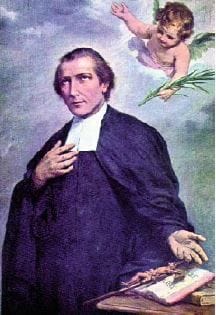 Our first martyr. Guillaume-Nicolas-Louis Leclercq belonged to a middle-class family. When he was 22 he entered the Novitiate of Saint Yon in Rouen. He was then successively a science teacher, the headmaster of an important school, Director of Novices, and a teacher at the Scholasticate. When the French Revolution broke out, inflicting on France the most violent years it had ever experienced, he was secretary to the Superior General of the Institute, Brother Agathon. There followed an unending series of outrages and abuses and, as always, the Catholic Church was one of the first victims. Those who could, tried to escape.

On August 15th the house on Rue Neuve where the superior general of the Brothers lived was attacked, and Brother Solomon, the only person there at the time, was arrested and brought to the Carmelite convent, which had been transformed into a prison, together with other priests and religious. After some days he was executed in the garden. This convent was the site of one of the most atrocious massacres perpetrated during the French Revolution.

166 bishops, priests and religious, imprisoned for having refused to take the constitutional civil oath, were subjected to a quick trial and im-mediately executed. We do not know the details of Brother Solomon's death, but there is no doubt that he was one of the victims of the mas-sacre on September 2nd 1792. Some days before his death, unaware of the fate that awaited him, Brother Solomon wrote the following words to one of his sisters: "Let us endure with joy and thanksgiving the cross-es and afflictions that he will send us. As for myself, I am not worthy to suffer for him, for I have not yet encountered any problems, and yet there are so many others who are suffering". (Bull. 244, p. 8) 1.

Brother Solomon holds the 57th place among the 151 martyrs that are listed in the Teterrima ac miseranda seditio, which is the bull of Pius XI that was issued for their beatification on October 17th 1926.

A miracle, which was examined by the diocesan commission in Caracas (Venezuela) in 2011, is now being considered by the Congregation of the Causes of the Saints in Rome.

The liturgical feast is celebrated on September 2nd.