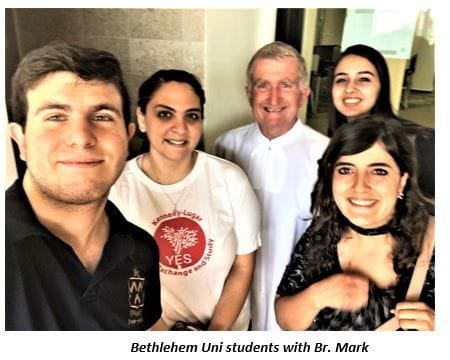 Religious involvement can be seen by some cultures as mind-numbing or foolish. In others, it is a badge of honour and commitment. Br. Mark, a proud Queenslander, proves the lie to the former, when one explores his ministry in four very different nations.

His early years were spent in outer Brisbane, and took in the spirit of the De La Salle Brothers from Grade 4.  He says that "initially what drew me to the brothers as a way of life was my experience of the Brothers who taught me at Scarborough.  They were "relate-able" and showed an interest in us as students.

"I remain a brother because I love being a Brother and all that it entails.I value living in a community of men who show genuine care and concern for each other".

Almost forty years ago, after studying commerce and history, Mark was told to teach drama at De La Salle College, Malvern. "It taught me to be expect the unexpected. More unexpected events have come my way in my life as a teacher in being asked to be a part of the inaugural Brothers' community at Tapini High School in the Goilala area of Papua New Guinea. Aside from the fact that there was no electricity, what touched me deeply was the enthusiasm and the gratitude of the students". His healthy interest in fitness led to his training champion cross-country teams!

Appointed to the very Lasallian work at BoysTown, Queensland, for disadvantaged boys referred by the courts, Mark then moved to Aotearoa New Zealand, for seven fruitful years as Director of Religious Studies at Mangere and New Plymouth.

Growing interest and skill in youth ministry, led to his appointment in 1999 to Oakhill College, Castle Hill, where for four years he pioneered a program of senior student Lasallian Youth Leaders (LYL), instrumental in providing retreat opportunities for students in Years 7-10, and in promoting service programs.   These have now been copied and embedded in most schools of the District, with 26 Youth Ministers animating the student LYL activities. They are a vital part of Lasallian Mission Services.

As District Youth Ministry Co-ordinator (2004-08), Youth Ministers were being increasingly employed and animated by Mark and school Principals; he was fully involved too with the 'Share the Mission" Volunteers and in Vocation Promotion. He recalls his many visits to Lasallian schools, sharing his passion for the Brothers' life. His standing among the Brothers was such, that he was selected by the Visitor of the time as his Auxiliary for four years.

Br. Mark talks often of "brotherhood", "relationships" and "witness" which he offered at the Lasallian Bethlehem University. A highlight of his life, he found here a rich experience of genuine welcome, and being "at home". An experience too of serving the vibrant and disadvantaged Palestinian youth with their ideals and struggles. From 2014-17, as Vice President of Human Resources, he led the Student Ambassadors, who greeted the many pilgrim groups that visited the University, themselves a shining light for an emerging Palestinian state.

As Lasallians we regularly pray, 'Live Jesus in our hearts forever' ... the marginalized, ignored, and abandoned are present in our existing Lasallian communities.  We are called to be attentive to their presence. At the same time these forgotten people are living struggling lives beyond our communities and we need to discern ways to reach out to them"

Now back in his old stamping ground, Auckland, his talents and experience across several countries led to employment in Holy Cross Seminary, as Director of Pastoral and Human Formation, strongly encouraged for priests-in-training by Pope Francis. The diverse 16 seminarians come from the six dioceses of N.Z. For Mark, his work emphasises the importance of emotional intelligence and self-knowledge. It is all about healthy relationships. His qualification in spiritual accompaniment is an asset that complements his relaxed and personable style.

When asked about the challenges for church today, Br. Mark emphasises "going to the margins of society and serving Jesus in every person who is marginalized, ignored, and abandoned.  As Lasallians, we regularly pray, 'Live Jesus in our hearts forever'. (These people)... are present in our existing Lasallian communities.  We are called to be attentive to their presence. At the same time these forgotten people are living struggling lives beyond our communities, and we need to discern ways to reach out to them".

A boring life? No way.