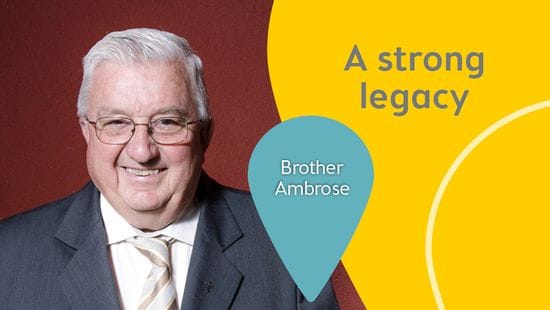 The Board of Directors and staff at the Lasallian charity yourtown have paid tribute to Br Ambrose Payne who recently retired after 14 years of dedicated service as Chair.

Br Ambrose, who is currently based in Rome as Interim Bursar of the Institute, has made a remarkable contribution to the life of the De La Salle Brothers and will be celebrating his Diamond Jubilee with the order this weekend.

His contribution extends to leadership roles as Principal of a number of Lasallian schools and as a pioneering leader in the field of Catholic higher education in Australia, recognised with the highest possible award from the Australian Catholic University- a Doctor of the University.

The Sydney-born Brother has also received an Order of Australia for his decades-long contribution to education.

Br Ambrose became the Chair of the then BoysTown Limited when the organisation incorporated as a public company limited by guarantee in 2002.

His exemplary leadership and unwavering commitment to Lasallian values has helped strengthen the services offered by the charity, allowing it to help tens of thousands of disadvantaged young people every year.

Under Br Ambrose's leadership as Chair, yourtown has been able to expand its support programs for homeless families and its accommodation for women and children escaping domestic violence.

It has also been able to expand its employment and training programs and strengthen its research and advocacy in social policy.

The executive leadership and staff of yourtown have expressed their immense gratitude to Br Ambrose for his guidance, wisdom and commitment to the organisation.

He has indeed left a strong legacy for a new Chair of yourtown to be announced in coming weeks.