Br Paul Toohey: a wealth of wisdom, knowledge and love 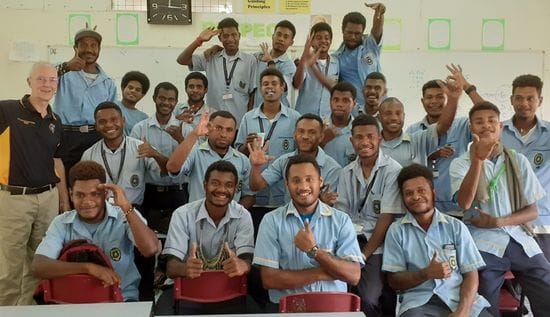 Br Paul is a very significant figure in the Lasallian community in Bomana, Papua New Guinea. With the last 50 years of experience, Br Paul has brought a wealth of wisdom, knowledge and love to every community he has been a part of across the world. On 28th March, Br Paul celebrated his Golden Jubilee, and so this interview took place to get to know Br Paul and what has brought him to where he is today.

Where were you born?
I was born in Melbourne, Australia, in 1953.

What is your current role?

My current role at De La Salle Secondary School Bomana is teaching General Mathematics to two Grade 12 classes. Class sizes are large, so it takes time to know students and their particular needs or issues. Being one of the few expatriates, I confer with other staff who are closer to the students and their world. I also look for opportunities to assist students outside lesson times or younger teachers in their planning and teaching, etc. There is an amicable atmosphere within the school, a credit to all including the administration.

I was a student at De La Salle College Malvern during the 1960's, and the Brothers on staff were a significant and formative influence on me. Not only did they teach well, but they had a genuine interest and regard for their students. The Brothers' activity and interests went beyond the classroom sports, singing, cadets, camps, etc. The Brothers' vocation was also promoted among the student body through regular visits of other Brothers.

Is there a particular moment or memory that stands out for you over the past 50 years?

My early years in the community as a 'fully-fledged' Brother stand out because of the change of role for me from student to that of teacher and Brother. I was class patron for a small Year 10 class, some students only a few years younger than myself! At the end of the first school term I was struggling to complete reports, staying up well into the early morning hours. An older Brother of the community suddenly appeared at the door with some curt advice, "Get yourself some sleep, no student requires you to stay up this late!"

Another memory that proved to be a turning point occurred during the September holidays of my first year in PNG when the incoming Visitor of the time, Br Bill Firman, proposed a new role, Director of novices. That came as a complete surprise I had only just started a two-year appointment to Bomana. Besides, that was a role reserved for a more senior Brother. But I was touched by the trust and confidence being shown in me.

What has your favourite assignment been?

I would have to rank my current role near the top because I enjoy the challenge of debunking students' fear of mathematics and daring them to discover its orderliness, predictability and even beauty! Occasionally the sun breaks through the swirling clouds of confusion, as on the day one of the lower achievers beamed at the end of a class, "Now I'm understanding!" Students are often hounded for this and that, and not always without reason. But where possible, I seek to generate some self-belief and suggest that a given question was not as tricky as first supposed, especially broken down into simpler parts!

What are some of your most significant achievements as a Brother over the last 50 years?

Exercising the role of Director of novices was a special role and ministry, demanding in its own way. You don't graduate large numbers as in a school or tertiary institution. But it is a position of great trust where you have time one-to-one with idealistic and well-intentioned young men, to accompany and encourage them in their discernment of vocation and God's call in their lives.

After a break from teaching, I have enjoyed returning to the classroom and helping students get their head around their academic work. Grade 10 + 12 students did well as a cohort in their national examinations last year which was a boost for everyone students, parents, staff, and school administration. Nothing succeeds like success!

What was your hardest assignment as a Brother?

The most challenging assignment for me was as Director of novices, first in PNG and later in the Philippines at the Regional Novitiate where novices came from several countries India, Pakistan, Sri Lanka, Thailand, Myanmar, Japan, PNG, Singapore and Philippines. It was a rich experience but also a complex one, cultural differences adding to the mix. As Director I was answerable to many parties the novices, the staff, the sending Sector, the Institute, myself, and to God who calls and sends us all!

What are two moments over the last 50 years that have shaped you as a person?

Everything shapes you as a person, not just one or two moments. But my time away from Australia at the Brothers' Lasallian Centre in Rome and at the Institute for Religious Formation in St Louis U.S. as well as other places in between was something both new and stimulating. The experience opened me to other ways of seeing and doing things; it was a time of greater independence, travel and making new friends.

Having time in countries outside Australia where many lack easy access to nutritious food, clean water, electricity, transport, hospitals, etc. has made me appreciate my good fortune, as well as admire those who press on in spite of more demanding circumstances. Looking ahead, I am hopeful that education, and a Lasallian education in particular, will empower today's youth to raise the standard of living in PNG while, at the same time, attend to those most vulnerable.

What has been the biggest influence/s on your life? What lessons did that person/s teach you?

Unsurprisingly, my parents and family have had been a major influence on me. My parents were fiercely loyal to each other and utterly devoted to the family they were raising. Brothers with whom I have lived in community have also been a big influence. I have been fortunate with all my community Directors, right up to the present! Brother Malachy Yates, my first Director and Principal, helped me in those early formative years to grow in confidence, advance myself, see the humour in situations, be satisfied with what I could do and leave the rest in God's hands, value each of the elements of the Brothers' life of prayer, apostolate and community.

Looking back, what advice would you have given to yourself when you were 30?

While there is a place for order and predictability, make space for change and surprises. Don't be afraid of the new; embrace it. The words of John Cardinal Newman ring true: "To live is to change, and to be perfect is to have changed often."

What advice would you give to someone thinking of becoming a Brother?

"Why religious life?" was a question put by an older Sister to a group of novices of various religious congregations. After a short pause, she gave a one-word answer, "JESUS".  That answer has always stayed with me. There is plenty of good to be done, many people in need. Becoming a Brother, unlike many other pathways, is not a career but a calling, God's calling, to a partnership, to brotherhood, to being in relation with many, as opposed to one particular person as in marriage. It may fit, it may not. It is an invitation. Reflect about it, talk to others about it, pray about it. Take your time, but also don't delay unnecessarily. The adventure beckons!

What was the most profound spiritual moment of your life?

A very profound spiritual moment for me was the occasion of my father's funeral in October 2018 which brought together so many diverse people in one place for one purpose. It was a fitting farewell to one who has been so significant to me and who has been such a conduit of blessings to myself and the family. It was a magnificent moment, both humbling and uplifting, more than words can express. I still want to say "thanks" to all who were present and a part of that occasion, as well as to others who could not be present but who offered their support and condolences.

The current COVID-19 pandemic is also a profound spiritual moment, adding to my sense of diminishment and mortality. I have been blessed with good health, even though the body protests more than previously. The reality of our finitude is neatly reflected in that heartfelt prayer of the Psalmist, which I like to make my own:

"Make us know the shortness of our life
that we may gain wisdom of heart.
Lord, relent! Is your anger for ever?
Show pity to your servants.
In the morning, fill us with your love;
we shall exult and rejoice all our days.
Give us joy to balance our affliction
for the years when we knew misfortune.
Show forth your work to your servants;
let your glory shine on their children.
Let the favour of the Lord be upon us;
give success to the work of our hands,
give success to the work of our hands."
Psalm 90:12-17