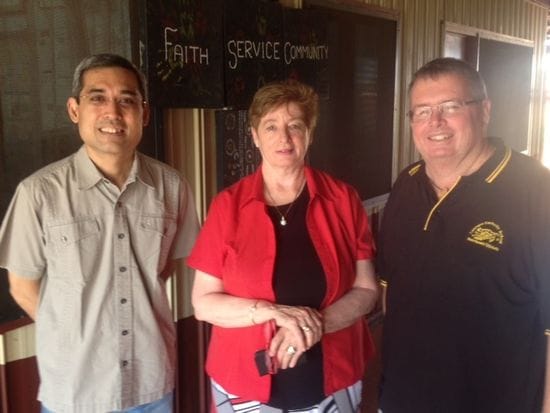 Pacific Asia Regional Councillor Br Ricky Laguda has received a warm welcome during a visit to Luurnpa Catholic School at Balgo Hills in the remote Kimberley region of Western Australia.

The Executive Director of the Lasallian Mission Council has been accompanying Br Ricky on his visit.

"'The second day at Balgo started with 7 am Mass in the picturesque Parish Church officiated by Fr James, the supportive Kenyan Parish Priest.  Shortly after, Br Ricky and I were immersed in the day's activities at the school. We visited some colourful classrooms; assisted with some reading tasks; spoke with staff about their numerous successes and challenges; checked out a range of school and BoysTown facilities; and celebrated Br Rick's birthday at morning tea.

I met with Carol Guerts (pictured) from WA's CEO for a lengthy discussion. We also attended a full school assembly led by Br Rick, and later shared sandwiches, stories and laughs in the Brothers' house with the very generous Share the Mission volunteers. Anyone who mistakenly decries the calibre of youth need only spend a little time in the midst of such fine people. Late in the day, teacher Tom Vidot drove Ricky and I through rugged local country to view rock art located outside of town. We were accompanied throughout by some spectacularly ominous black clouds and a cacophony of rolling thunder, while lightning strikes regularly punctured the air. But it was only melodramatic theatre from nature, a show that promised much and produced little. But the 'wet' is building and will soon do more than promise.

So a handful of thoughts after a short visit to Balgo: a committed Principal and staff absolutely dedicated to making a difference in the lives of the children under their care; social challenges within the local community that test anticipated educational outcomes; getting kids to school and keeping them there; attempting to provide employment skills (Certificate 1) for the older students for jobs that may not even be there, at least not in Balgo; and last, but by no means least, attracting a skilled educator to step into Br Rick's shoes as he soon concludes his Principalship.

We now embark on a 7/8 hour drive to Kununurra via Hall's Creek. For Br Ricky onto Brisbane, for me back to Sydney. On Tuesday, the Sydney school visits commence."