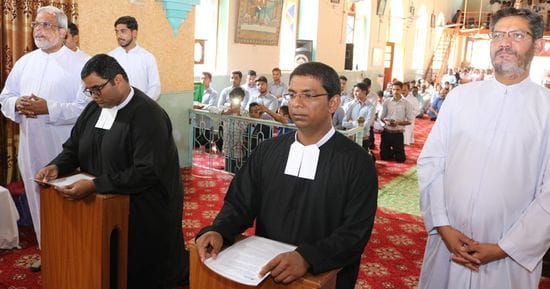 The town of Khushpur rejoiced this October for the Perpetual Profession of two De La Salle Brothers, joining in prayer, colour and song.

"I had a very important and special day," Br Tabish told Lasallian Outlook.

The jubilant brother is feeling happy, lucky and privileged to commit his life to the mission of Christian and human education for young people.

Br Tabish has shown great commitment since the beginning of his canonical formation journey that commenced twelve years ago. Aspirancy in 2006 was followed by Postulancy in 2011, Novitiate in 2012 and First Vows in 2013.

For his divine calling, this is just the beginning.

''Perpetual doesn't just mean those ten or fifty years that remain to me before I die. It means for all time.

"I desire to be united with my God uninterruptedly from this moment unto all eternity," he said.

"It was important for me because I said yes to God and committed my whole life for the very great purpose of serving God's people.

"It was a very solemn and grace-filled ceremony."

Fr Bashire, affiliated member of the De La Salle Brothers, was chief celebrant of the Eucharistic Celebration at St Fidelis Church in Khushpur, concelebrated with three other clergy.

The previous evening, Br Tabish took part in the ceremony of Mehndi, having colour placed on his hands in the Pakistani tradition.

Br Tabish is now one of the youngest professed members of the global, three-hundred-year-old order that teaches the mind and transforms the lives of young people.

He looks forward to continuing the mission that "changes lives and makes a difference in the life of a child so the world becomes a better place to live in."