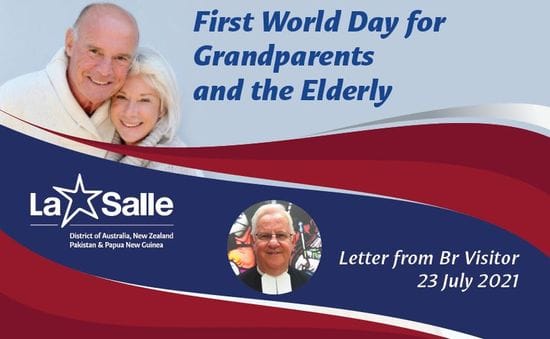 Pope Francis has named 25 July as the First World Day for Grandparents and the Elderly. While several of our younger Brothers may honour their grandparents on that day, we can all honour our elderly Brothers. The theme chosen by the Pope for the inaugural commemoration is "I am with you always" Mt 28:30).

Recalling the words of the Prophet Joel, "Your old men shall dream dreams, and  your young men will have visions" (Joel 3:1), Pope Francis said that the future of the world depends on the covenant between young and old because "who, if not the young, can take the dreams of the elderly, and make them come true?" (www.vaticannews.va/en/news/2021-06).

In announcing this event Pope Francis spoke also of the vocation of the elderly mentioning that there is no retirement from the work of proclaiming the Gospel. This led me to take a closer look at our Rule where six articles refer specifically to the elderly. "Inspired by the example of their Founder, elderly Brothers are aware they have begun a new stage in life. The Lord calls them to participate gladly and in a new way in the mission of the Institute" (Rule 65.2).