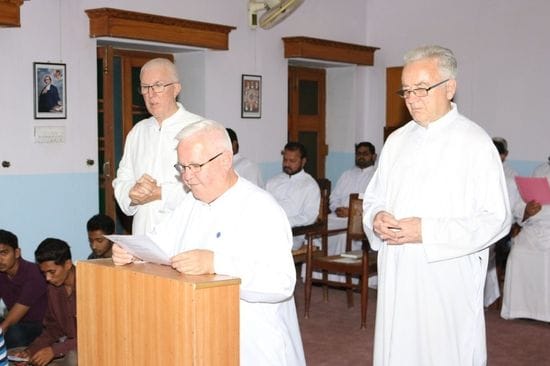 The Brothers and Aspirants of the Pakistan Sector gathered on the evening of 8th April to celebrate Brother David's Golden Jubilee. The celebration started with Mass at 7 pm presided over by affiliated member, Father Bashir Francis. Brother Aloysius organised the liturgy with the Mass of Jubilee being the main theme.  After the sign of the cross, Brother Shahzad spoke words of welcome and a brief but detailed history of Brother David's life.

During the Mass Brother David renewed his vows being sponsored by the two senior brothers of the Sector. Brothers Aloysius and Gregory. The singing was outstanding due to the efforts of the choirmaster, Brother Taimoor, and the Aspirants. Following Mass, a festive meal was held. At the beginning of the meal each brother present took a white gladi and said words of praise or gratitude to Brother David, after which they presented him with the flower. One of the most moving speeches was by Brother Gregory who told how he answered Brother David's call to come and work in Pakistan. He is still here thirteen years later.