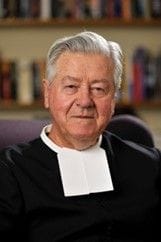 Brother Gerard Rummery, FSC, will be recognized with the Brother John Johnston, FSC Award for his lifetime of service to the Lasallian mission. The award is the highest honor given in the Lasallian Region of North America (RELAN).

Established by the former Regional Education Board in 2009, the Johnston Award is now presented by the Lasallian Education Council (LEC). It was named in honor of Brother John, the 25th Superior General of the Brothers of the Christian Schools, for his uniquely significant lifetime contribution to the Lasallian mission. This award recognizes Brothers and Lasallian Partners who, like Brother John, have endeavored on the international or Regional levels over the course of many years to advance the Institute's mission to provide a human and Christian education to the young, especially the poor. It is presented to those whose leadership, teaching, evangelization or scholarly research and writing have borne witness to an abiding faith and zeal, and whose efforts have had a transformative impact upon the founding story as lived today.

"Lasallians across the globe are indebted to Brother Gerard for all that he has done during his lifetime to deepen our collective understanding of and appreciation for the richness of the Lasallian story," said Dr. Kurt Schackmuth, LEC chair and vice president for mission at Lewis University. "He is an outstanding scholar, teacher and theologiana selfless and dedicated Christian Brother who exemplifies what it means to follow in the footsteps of the Founder. We have all benefitted from his generosity of spirit, his wisdom and charm, and his willingness to accompany all of us on the journey to become better Lasallian educators."

A Brother since 1947, Brother Gerard's contributions to the Lasallian mission stretch far beyond his home District of Australia, New Zealand, Pakistan and Papua New Guinea (ANZPPNG). He served two periods on the staff of the International Lasallian Center in Rome (1973, 1977-1982), which he directed from 1983-1986, and was elected twice to the General Council (1986-1993, 1993-2000). He is the author of the Institute's official life of Brother John Johnston, many Lasallian articles in various journals and a number of other books, including the 2003 title Brothers to One Another, which shares stories of displaced Brothers in Czech, Slovakia, Hungary and Romania prior to 1989. Since his return to Australia after 2000, he has worked mainly with educators as a presenter for Lasallian Education Services, an adjunct professor of the Australian Catholic University and a presenter at the Broken Bay Theological Institute. Adapting to current COVID-19 restrictions, Brother Gerard has hosted multiple online sessions for Lasallians throughout PARC as well as around the world.

Among his many contributions specifically in RELAN, Brother Gerard was a founding presenter of the Buttimer Institute of Lasallian Studies and of the former Lasallian Leadership Institute. He has generously given countless hours leading retreats, sharing presentations, participating in discussions and more to advance the mission. Brother Gerard attended the 2019 Huether Lasallian Conference to personally address the inaugural cohort of the Regional Formation Institute as well as to present the Johnston Award as a posthumous honor of his longtime friend and colleague Brother Jeffrey Calligan, FSC.