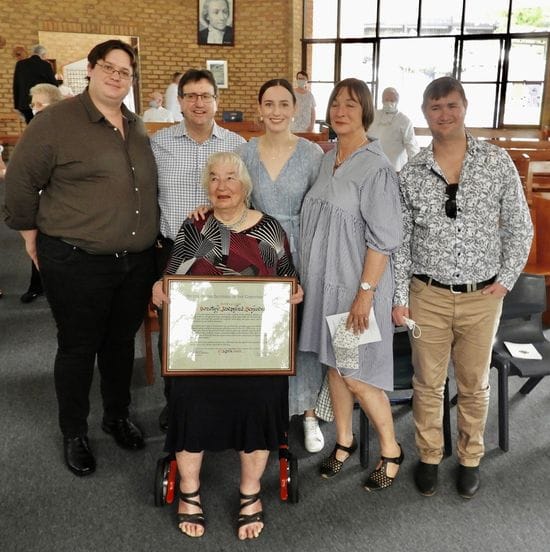 On Saturday, 4th September, a very worthy lady was Affiliated with the De La Salle Brothers.

The Ceremony took place during a Eucharist, that was celebrated in the chapel of Southern Cross Catholic College, Scarborough, Queensland.

Dot was supported by her daughter, Jenny, son-in-law Jerry, some of their children, and a number of past colleagues, friends and Brothers.

Due to the COVID situation, Dot’s two sons, Steve, in Canberra and Fred, in Sydney, were unable to attend.

To truly understand and appreciate Dot, and her generous ability to work, and give to others, it is helpful to know about, and live in a country community, that fostered and developed her as a person.

In towns and districts across western Queensland, people “look-out for one another”. They ‘gang’ together in times of hardship, crisis and disasters.

It was in such an environment that Dot grew up, matured, married and started her family, before moving to Scarborough, in the 1960s, with three young children.

It was in this same country environment that Dot was widowed, following her husband’s tragic accident.

After this, she needed to leave behind scenes, memories, loving friends and a lifestyle that had shaped her life and her ability to relate to people.

Now started her struggle to put a roof over her’s and her family’s head.

In 1960s, when Dot first started working at De La Salle Junior College, she had a young family in transition. She was still struggling to get on her feet after Bruce’s death. Prior to this, the family had spent many years living with, and supported by Dot’s parents. Dot’s children, while they did not fully understand, at the time, Dot’s new job, at De La Salle Junior College, was to provide her and the family, with security and purpose for the future.

Coming to the Junior College, Dot met a group of Brothers who ran Christian schools, where the students were encouraged to discover and develop the God-given talents, with which they had been blessed.

Dot discovered that the Brothers looked at people, events, and places with ‘Eyes of Faith’, as spelled out in the scriptures – especially the teachings of the New Testament.

She immediately felt ‘at-home’ in that environment.

Here started a fifty-year association and working relationship for Dot, in the three schools, and the Brothers.

Before what is today known under such names as, ‘Partners’, ‘Association’, ‘Signum Fidei’, ‘Lasallian Mission’, Dot took on all that these names signify, today. She has been a constant, for over FIFTY years, with Brothers, teachers, parents, students, parish folk, and the wider community.

Every day, when Dot walked Steve, Jenny and Fred to school, after leaving Jenny and Fred, at the Parish Primary School, having reached De La Salle Junior College, with Steve, she would stay on, to do “any spare jobs”, that the Brothers might have wanted done.

Before recording the variety of tasks that Dot undertook, it needs to be said that nothing matches the supportive care, friendship, loyalty, love for students, and the team work to make things “tick over”, in a school setting. These qualities are school builders, that cannot be weighed or measured or easily explained.

The Brothers who have known her can still hear Dot saying, “Ah Yeah, I can do that ...”, when asked to take control of some situation.  Another attitude that Dot's regularly displayed is: “You never know, if you don't try.”

It was a job that she ‘grew into’, over the years, as she discovered that she had a natural talent, for so many things, that she had not been trained to do. The Brothers loved the willing way she took on a multitude of school activities, that were part and parcel of daily school routine.

The Brothers used to call Dot ‘Girl Friday’, as she worked, at the same time, in roles ranging from Principal's Assistant, Librarian, and Canteen Manager, to list a few.

Through the fifty years, certain jobs ceased, but the soul of the contribution continued and grew.

While being so committed to the Brothers and Lasallian Education, Dot was always a mother, actively engaged in the support of her family. She was always conscious of their importance. Dot’s whole family, Steve, Jenny and Fred, supporting her commitment and dedication, spent numerous weekends and school holidays at the college, working with her. They spent many weeks putting together hundreds of copies, each year, of the successive School Yearbooks, using old duplicators and stencils. They spent holidays doing things like cleaning and tidying, so that Dot would have everything in place, for the re-commencement of successive new school terms.

Whenever there was an extra-curricular event at school, Dot would involve her children, as a means of ‘child-care’, as well as passing on the attitudes and example she had received, when their age. Dot and her family became part of every event, with the help they gave her. Her children, to this day, recount these as very happy experiences. As they comment, “We just thought that was what people did.”

Their memories of the 70’s, as they were also students at the college, were about Dot’s engagement and commitment with the College.

Through her ever-increasing involvement and commitment, Dot grew in a sense of meaning, which her family, friends and Brothers consider she carries to this day.

Dot’s family consider that her dedication and commitment to the schools, with such an enthusiastic and such a positive attitude, helped her heal and recover from the death of their father, to some extent at least.

Through all their time as children, their memories of the early 1970’s was all about De La Salle Junior College. They say, “In return we got a lot back from the school.”

They say that their memories of the schools are of the positive and loving culture, they saw, through their mother.

Throughout 50 years of working for ‘The Brothers’, at De La Salle Junior College, De La Salle College and now Southern Cross Catholic College, the ‘constant’ has been the dedication and commitment to the ministry of the De La Salle Brothers and Lasallian Education, that Dot has demonstrated. These qualities have been complemented by the joy and sense of purpose it has bought to Dot’s life and, as she would say, “that of my family”.

Dot has always made herself available for any student who needed a little extra support, attention, and TLC.  This has been one of many factors that bought much satisfaction to young people, as well as the greatest joy, to herself. At the same time, keeping some of them out of strife was a constant effort.

One of Dot’s great loves, throughout her commitment to the Brothers and Lasallian education, in all the Colleges, has been sport. Some of her favourite stories relate to her commitment to ‘B’-side footy teams that she coached. She was able to support and encourage teams facing certain defeat, at the hands of a much stronger side.

She kept their heads up, and motivated then to play their best, to the end of the game. She was so proud of them.

Down the fifty years, certain jobs ceased, but the soul of the contribution continued and grew. Dot made many lifelong friends working at the colleges, and her family attest that she treasures each one of them. Dot’s family comment; “I think working at the school has given Mum so much, at a time when she herself needed it most.”

Today, Steve, Jenny and Fred have moved on to their own lives and careers. They attribute their success to the excellent upbringing, education and life skills they learned, while being involved with their Mother’s commitment to the schools. They all will attest that, since leaving home, every time they speak to their mother, she will tell them about her latest project in helping or working with some student.

Dot loves to work with what she perceives as disadvantaged kids. This started way back in the early 70’s when she used to draft “tuck-shop-boys”, to give certain kids a level of responsibility and self-importance.

In more recent years Dot’s sense of purpose continued, as she worked in the Special Needs area of Southern Cross Catholic College, as a teacher’s aide. In this area, she has loved working with the Asian students, in particular, helping them to assimilate and keep up with the expectations of their teachers.

Dot will also say that she has learned much, as much from the students, as from the teachers.