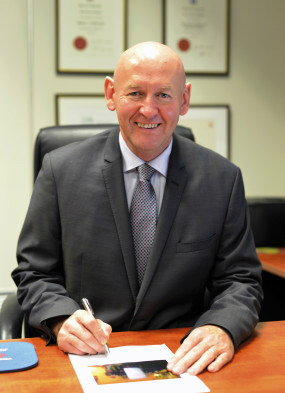 During the break, I was privileged to once again attend the Buttimer Institute of Lasallian Studies for my third and final year. The Buttimer Institute returned to its roots this year by being held at Manhattan College, in Riverdale, New York where it first took place in 1984. Buttimer, a program of the Office for Lasallian Education at Christian Brothers Conference, is named in honour of Brother Charles Henry Buttimer (1909-1982), the first American Superior General of the Brothers of the Christian Schools (1966-1976).

Buttimer brings together participants for two weeks each northern summer for three consecutive years to study the life and work of Saint John Baptist de La Salle and the origins of the Lasallian mission. The course ran from 25 June to 8 July, with 40 participants in Buttimer I, 36 in Buttimer II and 26 in Buttimer III.

Having now graduated from Buttimer after my three years of study I'd like to present an outline of the program and the tremendous benefits gained therein. Buttimer I is a detailed study of the life of Saint John Baptist de La Salle; his work, his motivation, passion and personality. Participants then transpose this knowledge and historical accounts into practical ideas to develop a deeper understanding of the Lasallian Mission and instil this into their own work. Buttimer I was really the Founding Story De La Salle the man, the human, the worker before the saint. There was great emphasis on his development of community. Pray together, study together this creates community. A salient and welcome reminder for the 21st Century.

Buttimer II focused on Lasallian Pedagogy. Through study and analysis of various texts from the Founder, we unearth what a visionary he was. So many of his principles for teaching and inspiring students in the 1690s hold strong even now in 2017. De La Salle, the man, invariably viewed learning as a relational process. He believed teachers must be aware of and committed to their obligations as a role model and demonstrate commitment, competence and passion to their students before delivering content. The Lasallian student's classroom is characterised by warmth, humour, interaction and rigour. Contemporary and relevant structures, guidelines and processes create a society of solidarity and fraternity where we are brothers and sisters to one another.

The Founder's commitment to a quality education and his insistence on high standards and accountability certainly rings true in our school today! These remain invaluable life lessons for our young men in Malvern as we continually emphasise the need to set high expectations for themselves, to be aware of and accountable to their responsibilities and to demonstrate respect in all aspects of their various relationships.

Buttimer III focused on Lasallian Spirituality. In parts, the work took on a more personal dimension as we articulated our own understanding and appreciation of spirituality from a Lasallian perspective. It's difficult to define, but my impressions of Lasallian Spirituality included a sense of living in the moment, caring for the young "as they are". It is drawn from Catholic traditions, assists in understanding and managing relationships. It is an evangelising mission of complexity and diversity.

Guided reflection and analysis of De La Salle's meditations and how they were influenced by scripture led to our group formation. We had the tremendous opportunity to work with two American Brothers, Br Tim Coldwell and Br William Mann, both renowned theologians and scholars and very influential in the USA Lasallian world and beyond. Their ability to unpack what drove St John Baptist de La Salle and most importantly, why his work is so meaningful in contemporary schools was greatly appreciated by the whole class.

Br William put it to us to think about the concepts, the meditations, the literature and scripture and try to then articulate, "What is the call that is emerging?" For me this included notions woven through the following ideas and goals:

There was a mixture of sorrow and joy in finishing Buttimer III. The 13 hour days were long and taxing and much of the content challenging and intense, but there so much was gained. One of my Buttimer III cohort, Father LaSalle (yes, really) Hallissey, O.P., the chaplain at De La Salle High School in Concord, California, appreciated the international attendee's presence.

"My biggest takeaway from the Buttimer experience is the lived reality and vitality of the Lasallian vision around the world. It was an amazing thing to talk with folks especially from the land down under and the Brothers from Africa and see how they are living the Lasallian charism in new and creative ways, ways that so often dovetail with current best practices in California."

That was one of the beauties of the Buttimer experience we are all Lasallians, but we're all living the mission in our different ways. The journey for us Australians, travelling so far to get to Buttimer, and the terrific sense of community during our six shared weeks over three years was a very special experience indeed. Living together in the students' dorms, eating meals together in the cafeteria, many hours of classes and study, daily community prayers and Masses and, of course, the socialising at the end of each day's work all built a great sense of community. Several of us observed that maybe this was intentional, to recreate the environment of the original Brothers!

The program engendered a culture of creativity and risk-taking, asking participants to put to continual use the analysis and interpretation of all material to make the mission our own. While my colleagues in Buttimer III came from a vast array of schools with a great variety of resources, there existed what Br Tim called a "creative fidelity" to the Lasallian principles of hope, servitude and faith.

Other comments from Buttimer participants:

"This program is life-changing.You enter the program with your own expectations, and each year the program supersedes those expectations. You will truly be changed by the topics you will be taught, the teachers that teach you, the people you meet, and the community that is built at the Buttimer Institute".

"De La Salle's astonishing perseverance and trust in God's providence in the face of overwhelming obstacles (affected me). His letters to the Brothers, which provided a direct and personal experience of De La Salle for me, felt like they were written directly to me".

"My spiritual life had been on 'autopilot' for quite some time prior to Buttimer, and through this experience, I found renewal and connection through community prayer with my fellow participants".

"All in all, the Buttimer program was a wonderful experience academically, professionally and spiritually. The opportunity to work, study, liaise and socialise with so many Lasallians from across the world created an international network from which we all learnt so much for the benefits of our home schools and will continue to do so in the future".
Author: Mr Peter Houlihan
About: Principal of De La Salle College, Malvern, Victoria
Subscribe via RSS
Tweet