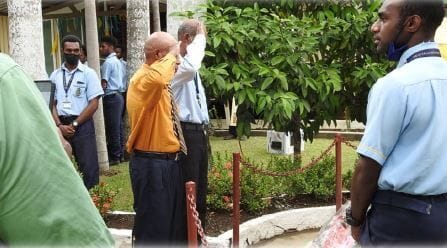 Forty-seven years ago, a RAAF Caribou transport aircraft crashed into a Papua New Guinea hillside near Wau, Bulolo in Morobe Province, killing its Australian crew and most of its passengers and high school students coming home from a cadet camp. The RAAF's worst peacetime air crash on August 28, 1972, claimed the lives of 25 of the 29 onboard. The crash of the DHC-4 Caribou in Papua New Guinea on this day was the most tragic accident in RAAF history. It was returning PNG school cadets from their annual training camp when it went missing on a flight from Lae to Port Moresby.

Most of the cadets were from De La Salle Secondary School Bomana. Five students survived and were found four days later. One died shortly after from his injuries upon his return to Moresby and two others have died more recently.

Students gave stirring renditions of the national anthems of Australia and Papua New Guinea followed by a recitation of the national pledge. Simultaneously the flags of PNG and Australia were raised, together with the 24 Provincial flags, a strikingly colourful salute!

On behalf of himself and Rev Patrick Gau (the two remaining survivors), Mr Joe Fraghi stepped forward and shared his memories of that fateful day 48 years ago, of gathering what resources they had and go in search of a clearing where they might attract the attention of a search party. Miraculously on the fourth day, they were spotted, and a rescue was mounted.