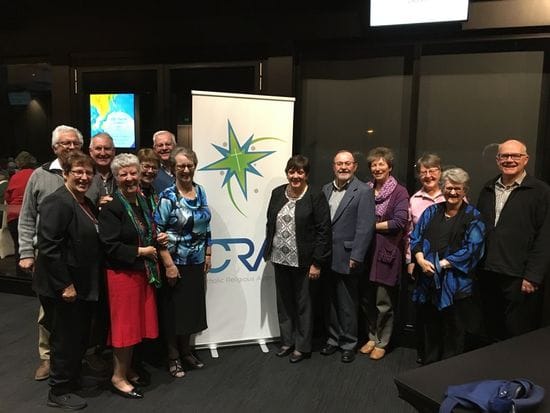 The 42nd National Assembly of Catholic Religious Australia began on Tuesday, exploring the theme of "Religious in Australia: Evolving with Hope" continuing the tradition of courageous and prophetic leadership which the women and men of religious congregations are known for.

A significant part of the gathering is the election of the new President and Council.

Resounding applause assented to the election of Sr Monica Cavanagh rsj, Congregational Leader of the Sisters of St Joseph into the role of President.

"It is a great honour to be elected by my peers to the role of President," said Sr Monica, "I believe the voice of religious men and women is very important at this time in the life of the Church and the community.  We are called to be the prophetic voice we must be courageous and respond as ecclesial women and men."

After a structural review, CRA has moved away from State representation to a more holistic model of shared leadership.  The new Council members take on this role with great energy and passion for responding to the challenges and opportunities of today's Church and society.

They are a Council who stand together and are committed to strengthening the voice of the religious in Australia.  The new Council members include:

Sr Ruth Durick osu, Provincial of the Ursuline Sisters and outgoing President is confident in the new team.

"Catholic Religious women and men are a voice for those who are marginalised by society and by the Church.  I am proud to have served as President for the past two years and will keep Sr Monica and the new Council in prayer as they lead us into an emerging future."

Sr Monica is deeply grateful for the leadership of her predecessor and understands the task ahead.

"I have a vision about the Church becoming a community of disciples rather than a hierarchy.  As President, I will be guided by God, and trust that the Holy Spirit can accomplish great things through our work together."