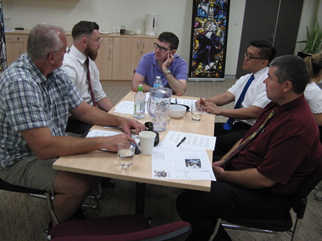 Merv McCormack (LMC Executive Director), Amanda Proulx and Br John were delighted to welcome twenty-two Sydney teachers to the Provincial Office on Monday and Tuesday, 6-7 February. New to the Lasallian family, these mainly experienced educators contributed from their own experience to discussions on what constitutes a Catholic school, and the fruitful tension between ensuring its Catholicity while including a diverse range of students, parents, priests, educators and administrators within the mission of 'human and Christian education'.

We scanned the period from the late 15th century to the late 19th century and remarked on the long line of women and men who have formed communities of Christian educators. It was noted that Angela Merici and Mary MacKillop bookended a series of people including John Baptist de La Salle, Paul of the Cross, Nano Nagle, Daniel Delaney, Edmund Rice, Catherine McAuley, Marcellin Champagnat, Bede Polding. All these had worked to bring the mission of the Church into the effective educational service of young people, especially the poor, in the context of their own times and places. Many of these founders are part of the heritage of schools within our Lasallian network.

With a particular focus on our own founder, the two groups considered De La Salle's life-changing experiences, and in particular the integrated spirituality for educators which he developed, and the approach to young people and their education that evolved in the long process of writing the Conduct of the Christian Schools. The challenge, it was recognized, is constantly to ask what these look like in our own times and places, when we are trying to meet the needs of the young people in front of us.

Each day finished with a simulation exercise led by Amanda, designed to allow participants to experience some of the tensions inherent in the practical implementation of Lasallian values, whether in the school itself, or in our own classrooms.

Our thanks, as always, to Mrs Pauline Toms for organising such enjoyable morning teas and lunches.
Author: Br John Cantwell
Subscribe via RSS
Tweet