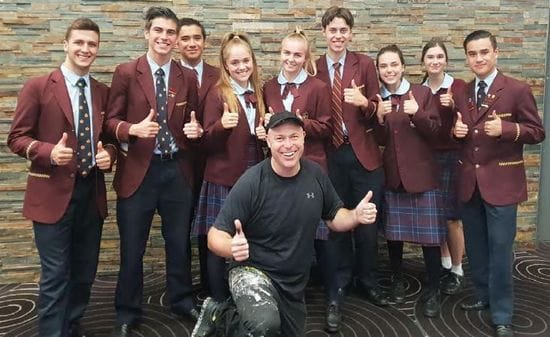 Nine Oakhill students were invited to serve in Yourtown's Celebrate the West charity event. This is an annual event that raises money for the San Miguel Family Centre, a service that provides accommodation for homeless families with children and aid in getting them back on their feet. Mrs. Leopardi, Ms. Hann and Brother Pat, travelled with us to Waterview in Bicentennial Park where the function took place. We had many roles on the day including ushering, greeting and raising money in the forms of raffle tickets as well as Celebrate the West's notorious lucky keys. We, as a group learnt a lot from the day as a whole. Firstly, we learnt about the champions of the West including Kurtley Beale, Waratah's Player and Michael Gremmo for his work with the Nathan Gremmo foundation.

These inspiring talks by the Champions of the West inspired us to understand the impact our efforts, like time and small donations, can have on the lives of others. Secondly, we learnt about the challenges of driving a manual mini bus which is operated by Ms. Hann. Lastly yet equally as important, we learnt about Yourtown's crucial work with the San Miguel Family Centre. We heard personal accounts of families whose lives have been positively affected as a result of the work from Yourtown and the San Miguel Family Centre. We were told of their families' struggles with poverty, housing instability and welfare dependency as well as the ways in which the San Miguel foundation provide not only housing yet counselling, family care and employment opportunities. Overall, Celebrate the West is not only a celebration of our achievements, yet a call to serve those in need.

San Miguel Family Centre was originally purchased and set up by Brother Peter McIntosh, ex Principal of Oakhill College and Brother Finbar Kelly supported by Mr Sid Kelly a parent of the College. Eventually the running of San Miguel was taken up by the Trustees of the De La Salle Brothers under the family service divisionBoysTown now yourtown.