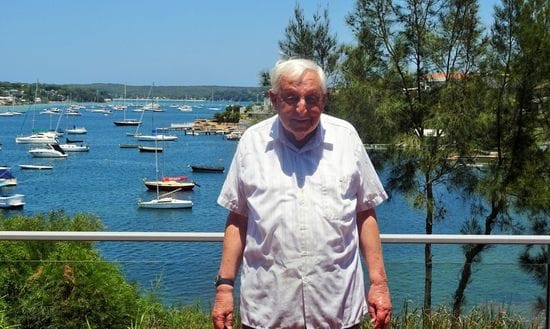 On a hot summer day overlooking the picturesque Gunnamatta Bay at Cronulla, Br Celestine Gavin, or Br Cel, as he is affectionately known, reflects back on his nearly 70 years as a De La Salle Brother.

Educated at De La Salle College Marrickville, Brother Celestine had a strong admiration for the work of the Lasallians and decided to become a Brother in his final year of high school.

"I had been thinking seriously about a teaching career and I had discussed the decision with my parents", he explains.

"I started off briefly in the Juniorate and then a well respected Brother from the United States, Br Francis De Sales, who was Novice Master at the time, asked three of us whether we would like to come over to the Novitiate".

Br Celestine has worked across many parts of the District, starting in Malvern in Victoria in the 1950s, had a brief stint in Papua New Guinea in the 1970s and was a former Principal of James Sheahan College in Orange in the early 1990s.

But he has a particularly strong passion for senior secondary education, having been Principal of two senior colleges, De La Salle Cronulla and Benilde College in Bankstown.

Br Celestine has had a long and revered association with the senior coeducational school in Cronulla where a library is named after him and where he has played a strong role as mentor to many current and former students dating back to the 1970s.

"I've seen first hand so many great changes in senior secondary education and there is so much more flexibility in the system now with students able to do a few days each week in an apprenticeship and some subjects at school and other subjects at TAFE", he explains.

Br Celestine has a keen interest in curriculum development and has continued to play an active role in a liaison role between De La Salle Cronulla and the Board of Studies over recent years.

One of his fondest memories from his time at the Lasallian school was a visit by Blessed Mother Theresa of Calcutta in 1972.

"That was organised by the Mothers' Auxiliary at the school and the parents here formed the first Co-workers for Mother Theresa group in Australia which was quite an achievement".

Br Celestine is also a talented linguist who took up the study of Italian while he was teaching in the 1980s in Bankstown and completed an Honours degree in the field through the University of South Australia.

"I wrote a thesis on a Franciscan poet from the 13th century in Italian which helped me upgrade my Bachelor of Arts degree which I'd completed earlier in life to the honours level", he said.

As he looks to the future for Lasallians in our District, Br Celestine believes declining vocations to religious life are empowering Young Lasallian volunteers to keep the spirit of the Founder alive in today's more secular society.

"I really admire the Share the Mission volunteers for example who travel out to the remote Indigenous community at Balgo Hills in the Kimberley region and often come back again once they've done their first trip there".

"They are keeping the Lasallian spirit alive".