Home >  Blog >  Clarity, humour and love until the very end. We reflect on the life of Br Paddy

Clarity, humour and love until the very end. We reflect on the life of Br Paddy 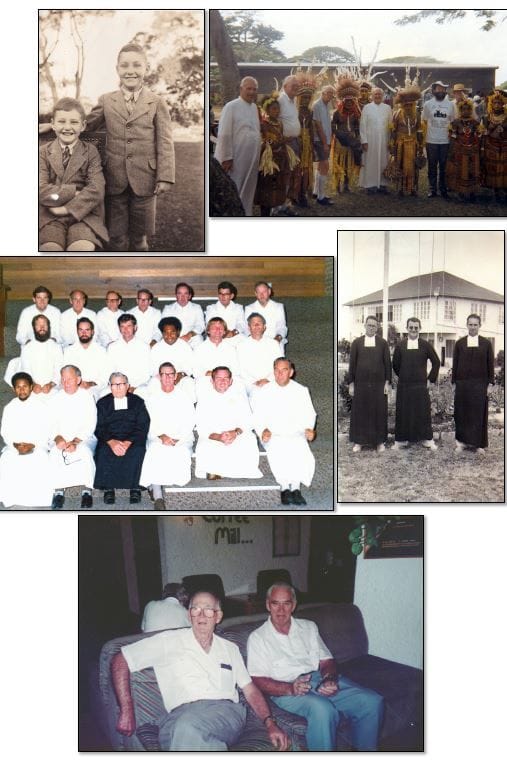 Br Patrick McInerney (Paddy) of the St Joseph's Community Queensland passed away peacefully on the 26 April. A Mass of Christian Burial was held on Thursday 6 May. The Relection of Br Tim Peter and the Eulogy of Paul McInerney (Nephew) is below.

God has been very good to us allowing Br Patrick to be with us these many years. We can no longer think about our own lives without thinking about him. Paddy belongs to us all especially to the many generations of Papuan New Guineans, he served so faithfully for over 30 years.

And God has been good to him to the very end of his life. After a short conversation with him last Monday week 26th April he asked the nurse if he could have some water; we both held the glass, Paddy took a couple of sips, closed his eyes and passed to the Lord waking up to the dawn of a new day.

With great clarity, humour and love until the very end, Paddy participated in community life and did those small things that we took so much for granted. There were always clean tea-towels and place mats ready for use in the linen cupboard, which had been left in the laundry waiting for him to do the honours! Oftentimes Paddy was congratulated by passers-by on his maintenance of the front garden. They no doubt never saw the bruises and scratches sustained in the fight with the bougainvilleas.

God also enabled him to see clearly his own circumstances and gave him the strength and courage to accept them as part of his journey through life. And while we are sad today that he is no longer with us, we should never forget how thankful we are to our good God for knowing this wonderful person. Paddy throughtout his long life continued to grow in wisdom and grace so quietly nurtured his hidden life in Christ allowing the light of the children of God to shine brightly in the simple and ordinary events of daily living. Paddy was truly faithfully kind.

In his letter to the Galatians St Paul outlines a cluster of qualities that are signs of the actions of the Holy Spirit. What the Spirit brings is very different; love, joy, peace, patience, kindness, goodness, trustfulness, gentleness and self-control (Gal 5:22). On their own these qualities would not be life-giving but living with a little bit of each and perhaps emphasizing one of these fruits we have a recipe for living a deeply human life. Brother Patrick, from his years of meditating and reflecting on his first and principal rule, the New Testament, leaves a final witness on kindness and gentleness.

We are often kind and gentle to those we love, especially those we would see as family but knowing in faith that God has no favorites, Christians are expected to see all members of the human family as our sisters and brothers. Kindness lived faithfully calls us to be like Jesus who left a story for our constant reflection on how to treat others who are different from us, whom we might see as our enemies, this story we know well as the Good Samaritan. It would seem to me that what kept Brother Patrick growing in his life hidden with God was his conviction to be kind faithfully.

Paddy has left us both heritage and wisdom. He was a man who set a tone of strength through humility and steadfastness. Paddy loved, lived, learnt and taught by example He trusted in God and could never have predicted his legacy-those he influenced and taught.

Brother Patrick's work in the inner-city as well as country classrooms and those he helped in the towns and countyside in Papua New Guinea contained only the barest minimum in learning space and would attract the adjective "poor" as the best description. Paddy's work with young people was rich in terms of the fruits of the Holy Spirit making all he came in contact with "aware of their dignity and to live and to be recognised as human beings and children of god."

Farewell Paddy, Brother Patrick, God's good and gracious servant, minister and ambassador of Jesus Christ, deep listener to the promptings of the Holy Spirit, enter joyfully into the kingdom prepared for you, rejoicing in a job well done!

As Syd's relatives, our contact was sporadic, occurring about every 5 years when he was at home visiting his mother, either in Orange or later on the Gold Coast.

Speaking with our relatives, there were several common themes that defined our interactions with Uncle Syd:

Reflecting on Our Uncle Syd, Br Patrick or just Paddy, I am left with the conclusion that his life was a prayer, and that his acceptance of a life of service to the brothers and others gave him a rich, varied and fulfilling life, filled with challenges, but also joy and fun. He will be missed.